The Acura TSX is an entry-level luxury car manufactured by Honda. Introduced in April 2003, it was sold only in the United States and Canada, but from the 2009 model year on it will also be available in Mexico. It is sold in North America under the Acura luxury marque, where it filled the gap as Acura's 4-door, entry-level sedan when the Integra sedan was discontinued in 2001 (1996 in Canada since the EL was the Integra sedan's replacement there). The TSX would also eventually replace the Acura RSX (which in turn succeeded the Acura Integra coupe). As of 2008, the TSX is the smallest vehicle in the Acura model line, other than the Civic-based CSX (and the preceding 1.6/1.7EL) sold only in Canada. All TSXs are built in Sayama, Saitama, Japan.

The TSX is badge engineered from the CL-series Accord (also known as the European Accord or JDM Accord) sold in Europe, Japan and Australia. The TSX initially had a restyled interior and different suspension tuning than the European Accord when it was introduced, however since 2008 the interior is now standardized for all three markets. In the Australian & New Zealand, the CL-series is sold Accord Euro, a smaller mid-size car, where the USDM Accord is sold in the large car category. In North American, the TSX is sold alongside the mid-size luxury Acura TL, which itself is based on the USDM Accord, as well as the USDM Accords sold under the Honda name.

The 2008 model year TSX's powertrain was comprised of a 2.4-litre inline four-cylinder engine, a six-speed manual transmission (which featured a magnesium casing, to reduce weight), and a front wheel drive layout. A five-speed automatic transmission was optional and did not incur extra cost in the U.S. based on MSRP,[1] however such was not the case in Canada. The TSX's suspension setup of a double wishbone front and a multi-link in the rear was especially tuned by the Honda engineers to maximize handling and cornering speed.

2005 was the second year of the TSX and Acura updated it with XM Satellite Radio, heated door mirrors, a four-way power passenger seat and illuminated the steering wheel-mounted audio and cruise controls. In 2006, the TSX was updated with slight tweaks to the engine (adding 5 hp); a sportier exterior styling featuring a slightly new front and rear treatment, standard side skirts, and standard, integral fog lights; and restyled wheels. State of the art interior features have been added, including a Multi-information Display (MID) in the instrument panel, more standard safety features, and luxury features such as an auxiliary MP3 player input and Bluetooth-compatible HandsFreeLink.[2] In 2007, a new Tire Pressure Monitoring System and an improved electronic rear view mirror were added, and the 2008 model year brought a few additional features and a new colour to the TSX. 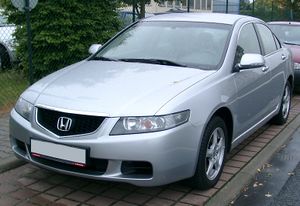 This is the Honda Accord sedan sold in Japan and in Europe. It is the basis for the Acura TSX.

The K24A2 engine used in the TSX was related to the engine in the Honda Accord (7th generation), the Honda CR-V, the Honda Element, and a smaller version in the Acura RSX and RSX Type-S. The K24A2 featured intelligent variable valve timing (i-VTEC) and produced 205 horsepower (150 kW) in this iteration.

Since 2006 model year, the Acura TSX has used a 2.4-litre in-line 4 cylinder engine making 205 hp (153 kW) SAE J1349 net. The advertised increased power figures on previous models were over-estimated by +10 hp (7 kW), the actual power rating is 205 hp (153 kW). SAE J1349 is a third party program designed to eliminate ambiguities that allowed engine makers to cite power and torque ratings higher than the engine's actual capabilities.[3] The most significant changes to the motor are described as follows:

On the intake side of the TSX engine, the diameter of both the throttle body and the intake duct were enlarged to increase induction flow rate from 95 liters per second to 110 liters per second. In addition the diameter and shape of the intake valve were enhanced to help increase intake flow by 16 percent and the high RPM cam profile for the intake cam was modified to provide increased intake valve lift and duration. In addition, a ventilation passage was machined into the engine block to reduce pumping friction by increasing air flow between cylinders.

Also significant of the i-VTEC system on the TSX and RSX-s was that unlike other Honda K-series motors variable timing was used on both the intake and exhaust ports in its three rocker design.

The fully redesigned 2009 Acura TSX made its debut at the 2008 New York International Auto Show on April 11, 2008.[7] The new TSX uses a base engine similar to that of the 2008 TSX. The engine is a 2.4-litre in-line 4 cylinder engine reaching 201 hp (150 kW) and 172 lb·ft (233 N·m) torque.[8] While the rated power of the new TSX engine is Template:Convert/hp lower than that of the 2008 model, Acura says the new engine distributes power across a much wider rpm range, which along with the increased torque, provides an increased feeling of power for the driver. The transmission choices remain 5-speed automatic and 6-speed manual, though the automatic version now comes with steering-wheel paddle shifters for optional manual shifting.

In addition to the 2.4-litre engine, the Acura TSX also receives Honda's 2.2-litre i-DTEC clean turbodiesel engine in the 2010 calendar year. The i-DTEC engine features an advanced NOx emissions reduction system that does not require urea additives to meet emissions standards in all 50 states.[9][10] While no official numbers on the TSX's new diesel engine have been released, some speculation places the engine at roughly 180 hp (134 kW).[11] The i-DTEC engine to be used in the Euro Accord is rated at Template:Convert/hp and 258 lb·ft (350 N·m) torque,[12] but the TSX's version has higher output.

The 2009 TSX comes standard with luxury features like leather seat upholstery, dual-zone climate control, power driver's seat with memory, sunroof, Xenon headlights, and adds a USB port music interface.[13] The TSX has an optional technology package, which includes a navigation system real-time traffic and weather, and a 10-speaker premium sound system with DVD-audio capabilities. Also making its debut on the new TSX is Honda's Advanced Compatibility Engineering body structure, which is designed to reduce accident impact on passengers. The TSX was released on July 16, 2008.

For 2010 there will be a v6 engine option with 280 bhp coupled to a 5 speed automatic with f1 style sport shifter.

In the IIHS crash tests the 2nd generation TSX received Good overall marks in both front and side impact crash tests and the Good score in all 14 measured categories.[14][15] The IIHS gave the TSX its "Best Pick" accolade.

2008 Honda Accord (JDM and European model)

2008 Honda Accord (JDM and European model)

Realtime racing prepares a factory TSX and RSX to compete in the Speed World Challenge Touring Car series. The factory TSX is refashioned to be stiffer and lighter, and includes motor work with raised compression, and a custom built sequential transmission. Driving for RTR in 2007 is Peter Cunningham, Pierre Kleinubing, Brandon Davis, Nick Esayian, and Kuno Wittmer. [20] Acura won the Manufacturer's Championship for the Touring class in 2005 with the RTR TSX, as well as the Driver's Championship for Peter Cunningham. Acura returned in 2006 and won the Manufacturers' Championship of the Speed World Challenge Touring Car class for the second year in a row, running both RSXs and TSXs. TSX drivers finished in 3rd and 4th in the Drivers' Championship.[21]