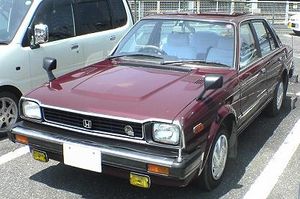 The Honda Ballade was a subcompact automobile built by Honda of Japan. It began as a four-door version of the Civic in 1980. In the UK it was launched at the same time as a very similar Triumph Acclaim with which it shared a Honda built engine.

After 1984, the Ballade shared most of its body panels with the Civic, except for a sportier front end, and formed the basis of the CR-X sports car and the original Rover 200. Of this second generation Ballade the top model - EXI - featured a 1.5L naturally aspirated 12 valve all-aluminium engine with multi-point fuel injection (using Honda's PGM-FI system) developing Template:Convert/bhp, the same engine was used on the first generation Civic CRX. Other features of the EXI included electric windows all-round, electric and heated wing mirrors, metallic paint, vented front disc brakes and hydraulic power-assisted steering. Lower specification models featured the same 1.5L engine but with fuelling provided via a carburretor, giving Template:Convert/bhp.

The Ballade ceased to be offered in Japan after September 1987, replaced by the Honda Concerto.

File:Sh44.JPG The Ballade name continued to be used for a Civic-based model in South Africa, where it was used instead of Civic on locally produced versions until 2000. South African Ballades were assembled by the local subsidiary of Daimler-Benz, which wanted to market a smaller and cheaper car in addition to its Mercedes-Benz models. The Ballade name was adopted because it was perceived to have more luxury and upmarket connotations than the Civic name. This was important because the Ballade was sold through the Mercedes-Benz dealership channel.

Known in South Africa as the SC9.

Known on the streets as the "popup" as to not confuse it with the SH4. This particular model had motorised eye lids which popped up when the main head light were switched on.

Also known as the EF (internationally) or the SH4 (South Africa). Known on the streets of South Africa as "DOHC" or "DOHC shape" as not to confuse it with the SC9 or SR4

Also known as the EG (internationally) or the SR4 (South Africa).

Also know as the EJ or EK (internationally) and SO4 (South Africa).

In 1999 the Ballade and Civic got a facelift with a total of 12 changes. Honda/Colt Division of Mercedes-Benz of South Africa marketing manager Guy Franken says: "With a total 12 derivatives in the range we believe that we have the entire small/intermediate car market covered and offer value in performance, specification, safety and affordability." [1]