The Honda ST-series minibikes are known as the Dax in Europe, the Trail 70 in Canada and the USA, and the Daschund in Japan.

The ST70 was exported to Canada and the USA as the CT70. This is an exception to Honda's usual practice of prefix letters indicating the bike family, followed by engine size. The CT70 is mechanically unrelated to other CT-series bikes such as the CT50 Motra, and the CT50, CT90 & CT110 Trail Cubs. The ST90 was sold in the USA as the Trailsport, and was not given a CT designation.

The CT70 was also sold in the USA from 1981 through 1994 with a new serial number format: JH2Dxxxxxxxxxxxxx, rather than the CT70-xxxxxxx format used since 1969. These 'JH2D' bikes are not listed in Honda Japan's production figures above, and are perhaps licensed production. [3]

As a general description, the ST-series bikes have a bench-style saddle, small fat tires, and folding handle bars. They have an air-cooled 4-stroke engine with either a semi-automatic 3-speed transmission or a 4-speed manual gearbox. The ST90 uses larger 3.00-14 tires, compared to the 3.50-10 and 4.00-10 of the smaller bikes. For more detail about individual models, see the accompanying Infoboxes and the External Links section below. [7] [8] [9]

Due to the diminutive wheel-size and limited speed, the ST-series bikes do not always qualify as road-legal vehicles, and were sold in some markets for off-road recreation only. Their licensing status varies with locale and time period during their nearly 40 years of existence. 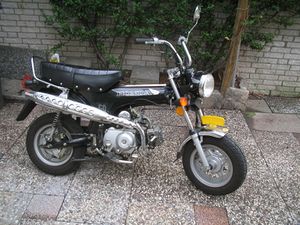 Honda's patents for the original ST-series expired in 1998, and replica bikes have become a popular export product for many Chinese manufacturers such as Jincheng, Lifan, Panda, and Redcat. For an overview of similarities and differences with the Honda bikes, see this www.minitrail70.com article.

The Dax name resurfaced at the 2001 Tokyo Motor Show with the e-DAX concept vehicle, a 25 kg folding electric wheel motor scooter meant to accompany the Bulldog concept car as a trunk bike. This car-scooter combination was previously introduced by Honda in 1981 with the City car and Motocompo folding scooter. [10] [11]