Floating to the right side of the page using the frame attribute and a caption: 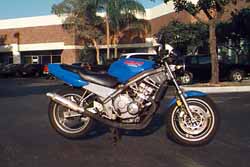 The Honda CB-1 is a small and light naked sportsbike with a straight four 399ccm engine that delivers 57 horsepower. Contrary to all other models of the Honda CB series the name is written with a dash. In some countries it was sold as Honda CB400F trying to connect the model to the original CB400F with 1975 which it has nothing in common. The Honda model code is NC27.

The bike was first introduced in 1989 and built till the end of 1992. Originally developed for the Japanese market the CB-1 was also officially sold in the USA and Canada. In many other countries it was sold as grey import.

The CB-1 engine is identical to the early NC23 models of the CBR400RR thus many of the early CB-1 engines have the engine code NC23E. It has a six speed gearbox and a chain drive with 15/41 ratio.