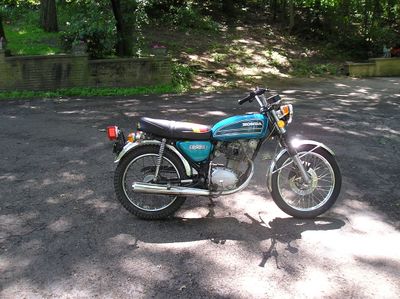 The Honda CB125s is a 122 cc motorcycle manufactured by Honda from 1971-1975 (1973-1985 in the US). It features an overhead camshaft (OHC) engine with a 9500 rpm redline and offers 100 mpg, quite astonishing for its period. It could comfortably maintain speeds of 55 mph and had a top speed of around 65 mph. Its low weight coupled with the free revving engine allowed it to surpass many bigger, more unreliable British bikes in performance. The engine could last tens of thousands of miles with only minimal attention; however, the oil had to be changed regularly (700 miles) to prevent premature wear of the camshaft bearings. The "S" model was produced from 1971 to 1975 and was replaced in 1976 by the "J" model (the US bikes retained the S designation). The newer model sported a two piece head, 124cc displacement, and a larger carburettor, but it did not perform as well as the earlier models.

Major Changes Throughout The Years

Aside from different color schemes and minor lettering differences, these are some of the major design changes that this bike went through.