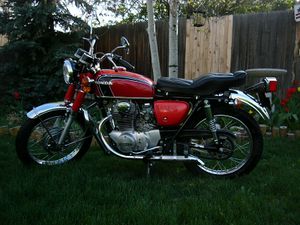 The Honda CB350 was a 325cc twin-cylinder, four-stroke motorcycle produced by Honda between 1968 and 1973. Its reliable motor, coupled with dual Keihin carburetors proved to be a popular design, becoming the highest selling motorcycle in American history, with 300,000 units sold. The machine evolved cosmetically over the course of its production, although engineering changes were mainly limited to the introduction of a hydraulic disk front brake on the 1973 CB 350G edition.

Like its predecessor, the Honda CB77 Superhawk, the CB350 was also offered in scrambler form, as the CL350, with high-mounted exhausts, and as the SL350, with upswept exhausts and off-road styling.

The four cylinder CB350F, a completely different model, was introduced in 1972 and the Honda CB360 twin became a short-lived replacement for the 350 twin in 1974.

The CB 350's reliability, respectable power, and ubiquity have insured its continued popularity today, with beginners, enthusiasts, and vintage racers.

In the UK at this time learners were limited to motorcycles of 250cc, and the sleeved-down CB250K4 was a popular sight on British roads, often in yellow. The 350 was relatively unusual, identical in appearance except for the colour, always green.