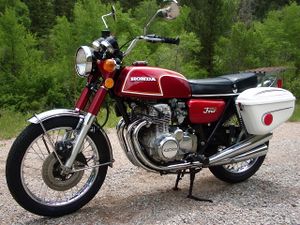 The Honda CB350F is a four-cylinder, four-stroke, 348cc motorcycle based on the larger versions of the day and was thought of as Honda's "one-up" to the other motorcycle companies. It was manufactured in Japan from 1972-74. Soon after production was discontinued, it was replaced by the CB400F. Although Honda had a 350 Twin that critics said was more powerful, lighter, and cheaper, many felt the 350 Four was faster, smoother running, and more stylish. The model to this date remains one of the smallest and most sophisticated mass produced four-cylinder designs and carries a cult following in the motorcycle community.