The Honda CBR1000RR was developed by the same team that was behind the Honda RC211V race bike for the MotoGP series.[1] Many of the new technologies introduced in the Honda CBR600RR, a direct descendant of the RC211V, were used in the new CBR1000RR such as a lengthy swingarm, Unit Pro-Link rear suspension, and Dual Stage Fuel Injection System (DSFI).

Providing room for a longer swingarm required massive changes to the engine architecture, another reason the CBR1000RR power plant shares nothing with the 954. Shortening the engine compared to the 954 meant rejecting the conventional in-line layout. Instead, engineers positioned the CBR1000RR's crankshaft, main shaft and countershaft in a triangulated configuration, with the countershaft located below the main shaft, dramatically shortening the engine front to back, and moving the swingarm pivot closer to the crankshaft. This configuration was first successfully introduced by Yamaha with the Yamaha YZF-R1 model in 1998 and inspired superbike design in the following years to date. 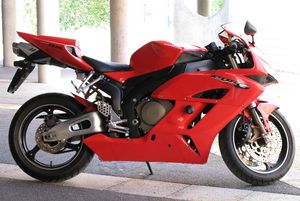 Positioning this compact engine farther forward in the chassis also increased front-end weight bias, an effective method of making high-powered liter bikes less wheelie prone under hard acceleration. This approach, however, also provided very little space between the engine and front wheel for a large radiator. Engineers solved this problem by giving the RR a modest cylinder incline of 28 degrees, and moving the oil filter from its frontal placement on the 954 to the right side of the 1000RR engine. This allowed the RR's center-up exhaust system to tuck closely to the engine, opening the space required for a massive MotoGP-style curved radiator with 40 percent more cooling capacity than the 954's unit, a key to making big horsepower with high durability.

The engine was designed specifically with an eye toward handling as well as horsepower and torque. Since the power plant represents a large percentage of a motorcycle's mass, the engine must be configured to assist the handling process, not hinder it. For decades, Honda has championed the concept of mass centralization, that is, concentrating the component masses as close to the motorcycle's center as possible. The CBR1000RR elevated that concept to a higher plane.

Honda engine designers paid special attention to making the CBR1000RR power plant an extremely compact package to enhance mass centralization and reduce the roll polar moment, while yielding other benefits as well. While some engines employ ever-more oversquare dimensions, Honda employed a relatively modest 75 mm bore with a 56.5 mm (2.2 in) stroke to derive a displacement of 998 mm (39.3 in). This choice yields a remarkably narrow engine fit into a commensurately narrower chassis, all the better for increased mass centralization and improved ground clearance as well.

Other measures taken to enhance mass centralization in the CBR1000RR included positioning the starter motor and drive gear on the right side of the engine, which also created a narrower engine profile for added ground clearance. The 1000RR incorporated a balancer shaft to virtually eliminate secondary engine vibration, and with an eye toward mass centralization it too has been positioned close to the engine's center of gravity. Placing other major masses (fuel and rider) closer to the roll axis resulted in a motorcycle that reacted more quickly and smoothly to control inputs at the handlebars. Like the RC211V and the CBR600RR, the CBR1000RR fuel tank shares space under a faux tank cover with a forward-mounted air box, thanks to the Unit Pro-Link rear suspension system.

The Unit Pro-Link design provided a wealth of benefits. The shock is contained entirely within the swingarm and is positioned lower than in a conventional design. Both contribute to mass centralization, in part by giving the centrally mounted fuel tank room to extend downward. Because the shock is contained within the swingarm and does not require a top mount on the frame, the bulk of the 4.8-gallon tank was positioned down low between the frame rails, close to the centerline of the machine. Two other benefits resulted from the RR's fuel placement; the mass of the fuel load has less effect on handling, thereby facilitating quick directional changes; and, because the fuel tank is shorter, the CBR1000RR rider sits closer to the steering head compared to the 954.

To achieve quicker handling, Honda engineers also lightened as many pieces as possible that are far from the center of mass. That gave rise to the RR's compact Line-Beam headlights, with their high-illumination three-piece reflectors; slim-line LED taillight; single-piston rear brake system that's lighter than that of the 954; an analog/digital fully electronic instrument panel that's one of the lightest and slimmest ever mounted on a street bike; plus a host of other changes.

The 2004 model carried over to the 2005 model year with only color scheme changes. 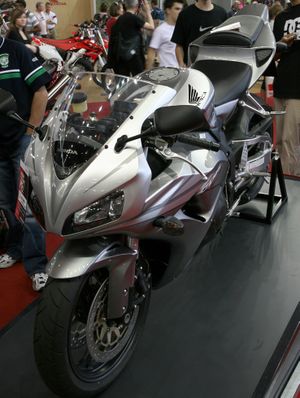 The 2006 CBR1000RR offered incremental advancements over the earlier model with more power, better handling and less weight. Changes for 2006 include:

The 2006 model carried over to the 2007 model year mostly unchanged. The brushed aluminum swingarm was changed to black and the bike is offered in four new color schemes; Black, Red/Black, Satin Silver and Race-Replica Repsol.

An all new CBR1000RR was introduced at the Paris International Motorcycle Show on 28 September, 2007 for the 2008 model year. The CBR1000RR is powered by an all new 999 cc (60.9 cu in) inline-four engine with a redline of 13,000 rpm. It features titanium valves and an enlarged bore with a corresponding reduced stroke. The engine has a completely new cylinder block, head configuration, and crankcase with lighter pistons. A new ECU delivers two separate revised maps sending the fuel and air mixture to be squeezed tight by the 12.3:1 compression ratio. Ram air is fed to an enlarged air box through two revised front scoops located under the headlamps. Honda claims power output to be at least Template:Convert/hp beginning at 12,000 rpm.

Honda made a very focused effort to reduce and centralize overall weight. A lighter, narrower die cast frame was formed using a new technique which Honda claims allows for very thin wall construction and only four castings to be welded together. Almost every part of the new bike was reengineered to reduce weight including the sidestand, front brake hoses, brake rotors, battery, and wheels.

In order to improve stability under deceleration, a slipper clutch is now available with a unique center-cam-assist mechanism. The Honda Electronic Steering Damper (HESD) has been revised this year as well. Another significant change is the exhaust system which is no longer a center-up underseat design. The CBR1000RR now features a side slung exhaust in order to increase mass centralization and compactness while mimicking a Moto GP style.

On the 5th of September 2008 Honda released details of the 2009 model. The bike remained the same, in terms of engine, styling and performance. However as a factory fitted optional extra the addition of Combined ABS "C-ABS" has been introduced.

For the 2008 model year, the CBR1000RR competes with the Suzuki GSXR1000, the Yamaha YZF-R1, the Kawasaki Ninja ZX-10R, and the Ducati 1098. The CBR1000RR is consistently winning comparison shootouts performed by major and minor motorcycle media publications.[3]

All specifications are manufacturer claimed.