The Honda CBR900RR is a large displacement sport bike introduced in 1992 by Honda as the first of the Honda Fireblade models. It was designed by Tadeo Baba.

In a move to refine the CBR900RR's handling traits over bumpy pavement, the 1995 model's suspension was upgraded with revised spring and damping rates, and a compression adjuster was added to the front fork. More aggressive bodywork incorporated a "cut reflector" design headlight and fewer of the CBR's unique fairing holes. Slimmer and firmer footpegs were patterned after the RC45 and a shift linkage replaced the original model's backward pedal. A new instrument panel included an electronic speedometer that measured speed from the countershaft sprocket. The only engine change in 1995 was the replacement of the aluminum valve cover with a magnesium piece. 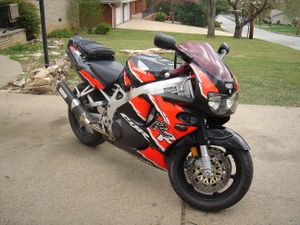 1996 brought the first major changes to the CBR900RR. In order to achieve a more optimized balance of rigidity, Honda significantly altered the 1996 CBR's chassis and suspension. The frame and swingarm were fabricated from larger, thinner-walled extrusions for reduced torsional rigidity. The fork and shock internals were re-designed, and the swingarm pivot raised by 5 mm (0.20 in). Revised ergonomics brought the bars 10 mm (0.39 in) higher and swept back five degrees more than earlier models, along with a slimmer gas tank. Engine updates included a bump in displacement to 918 cc (56.0 cu in) via a 1 mm (0.039 in) bore increase, slightly higher compression, a curved radiator, larger muffler, extra clutch plates, smaller alternator, and the addition of a throttle position sensor. With the revised motorcycle came a revised name of CBR918RR. The 1996 model carried over to 1997 unchanged except for the updates to color/graphics offerings. 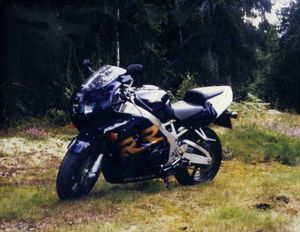 A major revision for the open-class Honda resulted in the CBR929RR, aimed squarely at the Yamaha YZF-R1. A completely new 929 cc (56.7 cu in) engine incorporated fuel injection, more oversquare cylinder dimensions, larger valves set at a narrower included angle, lighter internals, and an all-titanium, HTEV-equipped exhaust system. The "pivotless" chassis had the swingarm mounted to the engine cases but incorporated a brace underneath the engine. Updated suspension and brakes included an inverted front fork and huge 330 mm (13 in) front discs; and the 16 in (410 mm) front wheel was replaced for a more common 17 in (430 mm) wheel.

In 2002, engine capacity increased to 954 cc (58.2 cu in) which resulted in the CBR954 name. Larger injectors and radiator, re-mapped electronic fuel injection, and a more powerful computer were also added. The bodywork and fairings were reworked for a sleeker, more aerodynamic feel. The frame was strengthened and a more rigid swingarm added and the riding position/pegs were raised to allow for greater lean angles. Dry weight reduced to 168 kg (370 lb).

All specifications are manufacturer claimed unless specified.