The Honda CBX1000 was introduced in 1978 to a lot of technical fanfare. It was the first motorcycle Honda had produced with a six cylinder engine. The engine produced Template:Convert/bhp from its in-line six, twin cam, 24 valve engine configuration and also had a stacked engine accessory arrangement. This involved a jackshaft that provided the drive to the alternator and ignition equipment positioned behind the cylinder block. This arrangement produced an acceptable engine width and removed critical equipment from positions that would incur expensive damage in the event of contact with the ground. 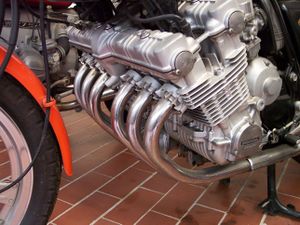 The CBX was not the first motorcycle to be powered by a six-cylinder engine (the Benelli 750 Sei had that honour), but it was the latest and the most advanced entry into the hotly contested superbike battle being fought by the Japanese manufacturers. Its blistering 11.36 second quarter mile time was considerably quicker than other superbikes of the day.

Despite its impressive brawn and intimidating six-pipe exhaust system, the CBX never really caught on in the US with the street-racing crowd. Some competitors were cheaper, lighter, and (more importantly) better handling. So the big Honda was often dismissed as being more show than go. The Suzuki GS 1000 S offered a much superior performance package of light weight, excellent handling and potent engine power. The CBX was also costly to purchase, maintain and insure although the early 'Z' model is the model most prized and protected by enthusiasts.

Failing to capture its intended audience, Honda switched gears and headed the CBX into the sport touring category. Adding a sleek fairing and custom-fitted panniers and, detuning the engine to Template:Convert/bhp transformed the six-cylinder machine into a reasonable sport tourer, with its smooth engine providing effortless cruising at more than 160 km/h (100 mph).

Comfort also came to this later model from its air-adjustable fork and rear shock which could be tuned to the demands of the rider. Honda decided that dual stainless-alloy ventilated front rotors (a first for the motorcycle industry) were needed to stop its 309 kg (680 pound) weight. Sadly, the sport/touring CBX still generated poor sales numbers and was discontinued.

Although it lasted only five years, its style did give birth both to Honda's sport bikes and to its Honda ST series (viz. ST1100, ST1300 Pan European). The CBX was a rare failure in the US market for mighty Honda but elsewhere had reasonable sales success. Like the CB400F of the mid 70's, this was not the first model discontinued due to lackluster sales in the US.