The CBX is a motorcycle series built by Honda, notable primarily for its novel inline-six cylinder 1000cc engine.

Fast, heavy, complicated and powerful, the CBX1000 was an expensive technological tour de force by Honda and remains a sought-after collectible in the present day. It started life as an unfaired "sports" bike, but was really too heavy for this. Honda later added a fairing, retuned the engine, changed the suspension, and the bike was reclassified as a sports tourer.

The CBX400F/Integra were produced between 1981 to 1984. This model is legendarily popular in Japan and favored by Bōsōzoku motor gangs. Before Honda started producing CBX400F, they had Hawk series which were out-dated technology at the time by compared to rivals such as Kawasaki's Z400FX, Yamaha's XJ400, RZ250, and Suzuki's GSX400. So Honda had to produce much better model which has up-to-dated technology and inline four cylinders. The CBX400F featured inboard disc brakes, rising-rate Pro-Link mono-shock rear suspension, and inline four engine which generated 48hp, most powerful among rivals. As a result, this model became successful and sold very well in Japanese market. Now, in the 21st century, the CBX400F is known as a collector's item so being traded at very high price in market. The coloring of CBX is still popular today, so some models of Honda offers the CBX coloring.

Also available were the DOHC four cylinder 16 valve CBX750, CBX650, CBX550,and the single-cylinder CBX250. The CBX550 and CBX400 featured inboard disc brakes that were designed to mitigate problems caused by wet weather braking. The CBX550 had two internally ventilated cast iron disks up front with inside-out dual piston calipers and a single enclosed disk system in the rear. The very similar CBX400 made do with an enclosed single disk in the front. The enclosed disk brake was also used on some models of the VTR250 and the VF400. The system was less accessible for servicing than conventional disc brakes and there were also reports of heat dissipation problems. Modern braking materials have since rendered any improvement obsolete. The CBX750, CBX550 and CBX400 also featured Honda's rising-rate Pro-Link mono-shock rear suspension design and were available in standard and half-faired versions.

The CBX250 is a relatively unknown bike. It was not imported into the US, and was imported for only one year in Canada. A hypothesised 6-7 were imported to New Zealand. Almost all documentation is difficult to acquire, and in fact cited years of production vary from 1984 to 1989. The overall consensus however is that it is a slightly underpowered, maneuverable learners bike. While not overwhelmingly fast it can exceed 100mph. 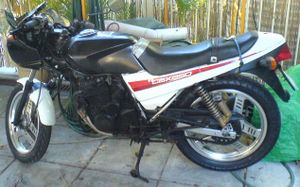