Honda introduced several 200 cm³ motorcycles with similar engines but different body variations in the 1980s. The model introduced in South Africa and Pakistan was known as the CD 200 Road Master. It had a twin cylinder 0 degree cylinder angle with a 360 degree Crank shaft angle engine which meant the pistons moved together and reached TDC (Top dead centre) and BCD (Bottom dead centre) at the same time. It was a detuned version of the Honda CD185 twin. It had the same Bore as the CD185 but Low compression Pistons (8.8:1) with a 53.0x44 mm Bore x Stroke compared to 9.2:1 Compression and 53.0 x 41.0 mm Bore and Stroke For the CD185 The result was less horse power, a higher fuel economy and a lower top speed. The Electrical generator system was also different from the CD185 apart from this the models were much similar.

The CD 200 sold more for its looks then performance as its square speedometer,huge front and rear mudguards, twin chrome exhausts, neatly tucked in choke behind handle bars, a chrome plated fuel tank with the Honda logo and Mock Chrome Air intake manifolds on side panels contributed to an interesting styling.

The bike was a cheap commuter vehicle with a claimed 100 miles (160 km) per gallon and a smooth ride. Too slow for a 200 cm³ bike, its top speed was only 70 mph (112 km/h) as the engine was detuned to keep maintenance cost to a minimum. This bike targeted users who wanted a comfortable cheap transport suitable for long routes with low maintenance. Use of simple drum brakes in rear and front and a single 26 mm Keihin carburettor (PD 33A TA) with 105# main Jets were other measures to keep the maintenance low. The bike accelerated hard up to 65 mph (105 km/h) after that it was a flat ride. The engine had to be revved very hard to create any kind of excitement as the bike was too heavy (140 kg) for an engine that produced a modest 16 bhp. 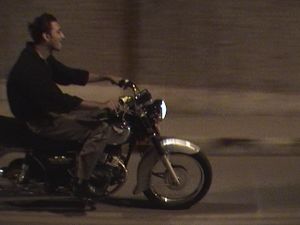 This model suffered from various manufacturing faults like a noisy cam chain and an unreliable electrical starter (later Benly models were upgraded with 12 volts CDI system in the UK). In the UK the CD200 was affected by legislation restricting learner riders to bikes limited to 125 cm³ and 12bhp. Honda introduced a 125 cm³ CD 125 Benly with a 5 speed transmission (the engine from CD125 was later used in Honda 125 Rebel) after the CD200 was withdrawn.The CD 200 Road Master was sold in South Africa until late 2004, it was used mainly as a courier/delivery bike. It retained the 6 volt electrics and points ignition. 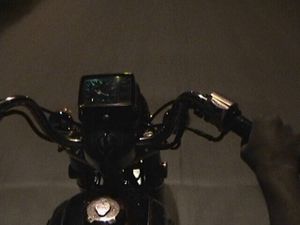