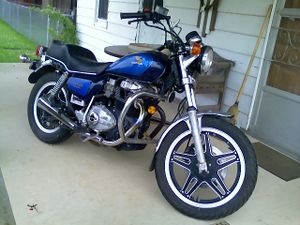 The Honda CM450A was a motorcycle created by Honda in 1982 and 1983. It had a 450cc SOHC parallel twin engine with two carburettors and a 2-speed automatic transmission. It was not a full automatic, however, because the rider had to manually shift between first and second. It is called automatic because there is no clutch required due to the torque converter. The chain-driven CM450A had a top speed of 85 miles per hour (135km/hr) and weighed 390 lbs. In 1983 the CM450A had a top speed of 100 miles per hour. Both models had a front disc brake and a rear drum brake. The suspension consisted of two shocks in the rear and telescoping shock-absorbing front forks. The gas tank had a 3.5 gallon capacity with no gauge. Instead, it had a reserve setting that would last about 35-40 miles after the main tank was empty. This was a common setup on older motorcycles. The exhaust was routed through a separate pipe and baffle on each side of the motorcycle. This was also characteristic of older motorcycles. It had an electric start with a kick start as well.

Today the CM450A or Hondamatic is a sought-after collectors motorcycle. They also make very good learner's bikes for someone who wants to get a feel for riding without getting something too fast or too large.