The Honda CT110 ("Postie Bike") is a small 105cc (not 110cc as the model number would seem to indicate) motorcycle with a four stroke engine. They are well known in Australia due to their use by Australia Post as a delivery bike. This also makes them the highest selling motorcycle in the country. A slightly modified version, the CT110 AG, is sold for agricultural use. This version is not road-registerable. 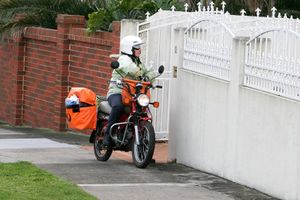 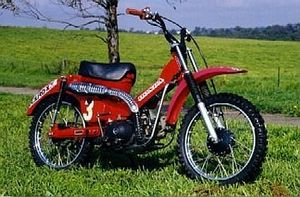 An example of a racing CT110

CT-110s are well regarded for their extreme reliability, economy and ease of operation. The clutchless four speed transmission (centrifugal clutch) does not require a clutch lever, freeing the left hand of the rider - making mail delivery easier for Australia Post workers.

Increasing fuel prices have seen second-hand CT110s become more common as commuter motorcycles in major Australian cities. The CT110 has a low top speed (just over 80 kilometres per hour) and acceleration compared to most other motorcycles, but their high reliability, fuel economy and low price make them a popular alternative to motor scooters.

The novelty value of the bikes has seen their usage as racing and stunt motorcycles, though heavy modifications such as use of nitrous oxide, methanol fuel, supercharging or turbocharging engine additions are necessary. Australian Freestyle Motocross Rider Jono Porter jumped a 75 feet (23 m) gap jump on a CT110.

CT-110s are only available via second-hand sale from Australia Post in bulk lots, though third-hand sales have increased over 40% in the last 3 years. Increased demand has inflated the average price of the bikes - prices for a good condition CT-110 range from $1500 to $2500.

Apart from the Australian market, large numbers of CT 110 and CT 90 were also brought to Tanzania in east Africa, where many are still in use today. Among the original users was Danish aid organisation Danida. During the late 1970s and 80's they were the standard issue motorcycle for volunteers.