This article is about the first and second generations of the CR-X. For the third generation, see Honda Civic del Sol.

The Honda CR-X, originally launched as the Honda Ballade Sports CR-X in Japan, was a front-wheel-drive sports compact car manufactured by Honda. The first generation CR-X was sold in some regions outside Japan as the Honda Civic CR-X. The name "CR-X" and what its acronym stands for is widely disputed, the most popular being "Civic Renaissance model X".

In the American market, the CR-X was marketed as an economy sport hatchback, having room for just two passengers. European markets, however, received a more powerful ZC Template:Convert/hp engine and 2+2 seats. Redesigned in 1987 and produced to 1991, the CR-X was popular for its performance, nimble handling, and good fuel economy. In the US its performance model, the Si (note: 1590 cc SOHC (D16A6) engined, unlike the JDM Si 1590cc (ZC) DOHC), was a favorite. Honda's 1992 CRX del Sol was marketed as a CR-X in some markets.

The original 1.33 liter car and the later American-market CR-X HF (High Fuel economy) model could reliably achieve very good gas mileage, more than a decade before gas-electric hybrids appeared on the market, and at no price premium over the base model; the 1.3 liter was rated (at current ratings) at 41 mpg city and 50 mpg highway.[1] The Japanese Si and European 1.6i-16 models came with a 1590 cc DOHC engine putting out Template:Convert/bhp. Though similar versions of the same engine, the Japanese Si engine was stamped ZC, whilst the European engine was stamped D16A9.

The R. Straman Company of Costa Mesa, CA converted 310 Honda CR-X's into convertibles from 1984 to 1987. The Straman-built CR-X Spyder was the cover car on July, 1984 issue of Road & Track Magazine. These conversions are known as a coach convertible.

The chassis was significantly changed in 1987 from its original torsion bar front and semi-independent rear, to fully independent wishbones all around in line with its sister Civic/Ballade models. Outside of North America, this generation 2 CR-X was available with a 1495 cc sohc or an updated version of the 1590 cc DOHC ZC engine. Many of these were fitted with fuel injection as standard.

In September 1989 Honda also added the 1595 cc B16A VTEC engine to the lineup outside of America. The VTEC engine used Variable Valve Timing and Lift to provide increased power in the high rev range, while still allowing low fuel consumption and better idling at low RPMs. The B16A produced Template:Convert/bhp in the European 1.6i-VT model (where the engine bore the designation B16A1) and Template:Convert/bhp in the JDM SiR model. The CR-X was the second car to receive a VTEC engine, shortly after the Integra, although the CR-X was more popular and common.

The VTEC-equipped models also received a makeover, with updated bumpers, lights, bonnet/hood, brakes, suspension and dashboard design amongst other things. Additionally, some of these design changes were added to the concurrent non-VTEC models.

One of the options for the Japan-market CR-X was a glass roof, a fixed glass panel which stretched from the top of the windshield to the top of the hatch opening. Relatively common in Japan, these are sought-after models in other markets.

Second-generation CR-Xes in the US could choose between three different trim levels: The standard (unlabeled, sometimes called the "DX") with the 16-valve 1495 cc "D15B2" engine and Dual-Point Fuel Injection (DPFI), the HF ("High Fuel efficiency") model with the 8-valve 1495 cc "D15B6" engine and Multi-Point Fuel Injection (MPFI), or the Si ("Sports injected") model with the 16-valve 1590 cc "D16A6" engine and MPFI. "DX" models were available with an automatic transmission, all others had five-speed manuals. The Si models all came with a power sliding moonroof.

In 1992, Honda replaced the CR-X with a new, Targa topped, Civic-based model called the Honda Civic delSol, otherwise known as simply the Honda delSol. The delSol was also badged as the CR-X delSol in some markets, and known as simply the CR-X in others. It is because of this that the delSol is generally considered the "3rd Generation CR-X" among enthusiasts, although it was arguably a very different car and Honda had seemingly quite different design goals when they built it((fact)). In the United States, the delSol came in three trim lines: S, Si, and VTEC; the 1994-1997 models featured a Template:Convert/hp DOHC VTEC-engine. Production of the delSol ended in 1997, and thus, the CR-X line was retired.

There have been many rumours of a CR-X comeback, none of which have come to fruition. The newest rumour involves the Honda REMIX concept which was presented at a recent Los Angeles International Auto Show. Designer Ben Davidson denies that any design elements were taken from the CR-X and Honda also claims there are no production plans for the REMIX; it was simply a design exercise.

Honda has debuted a new sporty compact hybrid hatchback, dubbed the CR-Z, at the 2007 Tokyo Motor Show. Although Honda has repeatedly stated that the name CR-Z stands for "Compact Renaissance Zero", many believe that this is the latest incarnation of the CR-X, given its exterior design as well as its function as a compact sports car. Honda has confirmed that the CR-Z will go into production, along with the FCX concept, in 2009.[3]

Articles on the CR-X have compared its appearance to that of the Honda Insight[2][3]. 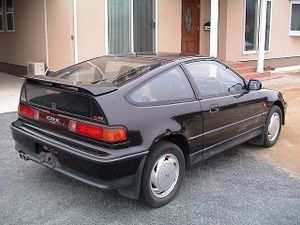 Honda CRX Si at an autocross

Like the Civic, due to the wide availability of parts, the CR-X is popular for motorsport usage. In the United Kingdom, there was a one make series dedicated to the series 2 of the CR-X[6] which soldiered on a few years after the series 3 was introduced and was popular for showroom stock racing series. Nowadays, the car is popular for drag, autocross, and road racing events.