Honda Racing F1 Team was a Formula One (F1) team run by Japanese car manufacturer Honda, between 1963 and 1968 and 2005 and 2008. Honda's involvement in F1 began with the 1963 season; their withdrawal in 1968 was precipitated by the death of Honda driver Jo Schlesser during the 1968 French Grand Prix.[1] They returned in 1983 as an engine supplier, a role that ended in 1992. They returned again in 2000, providing engines for British American Racing (BAR), and by 2005 BAR had been bought out and Honda Racing was re-established.

It was announced on December 5, 2008 that Honda would be exiting Formula One with immediate effect due to the current economic crisis and are looking to sell the team.[2] 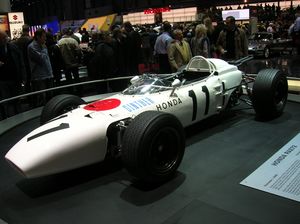 Restored 1965 Honda RA272, the first Japanese car to win in Formula One. The car is painted in the racing colors of Japan.

Honda entered Formula One Grand Prix racing in 1963, just three years after producing their first road car. They began development of the RA271 in 1962 and startled the European-dominated Formula One garages with their all-Japanese factory team (except for American drivers Ronnie Bucknum and Richie Ginther). More startling was the fact that Honda built their own engine and chassis, something only Ferrari and BRM - of the other teams still running in 1962 - had previously done.

In only their second year of competition, Honda reached the coveted top step of the podium with Ginther's win in the RA272 at the 1965 Mexican Grand Prix. For the new 3.0L rules from 1966, Honda introduced the Honda RA273. Although the RA273's engine was a well-designed, ~360bhp V12, the car was let down by a relatively heavy and unwieldy in-house chassis. Honda returned to the winner's circle in 1967 with the new Honda RA300, driven by John Surtees. This won the 1967 Italian Grand Prix in only its first F1 race. The RA300 chassis was partly designed by Lola in the UK, and this resulted in the car being nicknamed the Hondola by the motoring press. This was the last competitive car that Honda produced for F1 in the 1960s.

Withdrawal after death of Schlesser

The following year's Honda RA301 only reached the podium twice. The team's new Honda RA302 appeared in only a single race at Rouen-Les-Essarts, lasting only a few laps before its fiery crash resulted in the death of driver Jo Schlesser. The death prompted Honda to withdraw from F1 at the end of the 1968 Formula One season.[1] 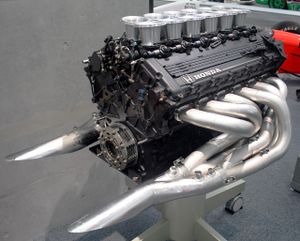 Honda returned to Formula One in 1983 as an engine supplier for Spirit and stayed in the sport for a decade, at various times teaming with Lotus, McLaren, Tyrrell and Williams. Honda engines were considered the ticket to Grand Prix glory due to their power, reliability, and winning track record. Honda supplied its engines to six constructor champions, as well as five driver championships (3 by Senna, 1 by Piquet, and another by Prost), before dropping out of the sport again. Honda-powered cars had won 71 Grands Prix, by the end of the 1992 season.

From 1993 to 1998, Honda's only presence in F1 was as an engine supplier through its associates Mugen Motorsports, who supplied engines to Footwork, Lotus, Ligier, Prost and Jordan. Mugen-powered cars had won 4 Grands Prix by the end of the 1999 season. In 1998, Honda was seriously considering entry in Formula One as a constructor, going as far as producing an engine and hiring Harvey Postlethwaite as technical director and designer. A test car, RA099, designed by Postlethwaite and built by Dallara, was made and tested during 1999, driven by Jos Verstappen. The team impressed at test sessions, beating some more experienced and better financed teams, even if they were mostly in the midfield. At a test of this car, Postlethwaite suffered a fatal heart attack, the project was later shelved and Honda decided to merely recommit as a full works engine supplier to BAR, starting in 2000.

Honda returned yet again in 2000, providing engines for BAR. They also supplied engines to Jordan Grand Prix for 2001 and 2002. This would lead to a battle for the right to use the Honda engines in the long term. In 2003, despite their better showing in the previous 2 seasons, Honda dropped Jordan Grand Prix. In mid-November 2004 Honda purchased 45% of the BAR team from British American Tobacco (BAT, the founder and owner of BAR) following BAR's best season, when they were able to achieve second place in the 2004 Formula One season, a year dominated by Michael Schumacher and Ferrari.

In September 2005 Honda purchased the remaining 55% share of BAR to become the sole owner. BAT continued as title sponsor with the Lucky Strike brand in 2006, but withdrew from Formula 1 for 2007. It was decided that the team would race under the name Honda Racing F1 Team from 2006.

Despite showing promise pre-season (with the RA806 being considered one of the most powerful of the new V8 engines), Honda demonstrated fairly mediocre performance at the start of the 2006 season despite a pole position at Australia. Prior to their win at Hungary, they had only accumulated a single podium finish, a third place from Jenson Button at Malaysia. The main reason for lack of form (the team was expecting to challenge for the championship) was down to reliability, with the team dropping out of contention for race victories many times. Pit-stop problems also hampered the team early on, in one case effectively ruining Jenson Button's chances for a good result and possible podium at Imola. Rubens Barrichello did not have a good season for the team, down to the fact that he had to get used to the new brakes and traction control, after moving from a very successful six year stint at Ferrari. Nevertheless Rubens had out-qualified his team-mate in the final four races.

Honda had a particularly poor showing at the British Grand Prix in 2006. In particular, Jenson Button was eliminated after the first portion of qualifying after the team failed to get him out for a second run. This resulted in his qualifying 19th. He then retired with an oil leak. In light of this poor form, it was announced that Geoff Willis would be adopting a factory-based role to concentrate on aerodynamics. Following the appointment of Senior Technical Director Shuhei Nakamoto over Willis' head and Mariano Alperin-Bruvera as Chief Aerodynamicist Willis' position appeared difficult, and reports indicated that he left the team.

Rubens Barrichello driving for Honda at the 2006 Brazilian GP.

At the Hungaroring, fortunes changed. Barrichello and Button qualified third and fourth, though Button had to drop ten places, following an engine change. In an incident-packed race, Jenson came from fourteenth on the grid to win his first race, with Barrichello finishing fourth. After this win, the team's performance went up noticeably, displaying consistency (if not overall performance) arguably better than championship leaders Ferrari and Renault. Button scored as many points as championship runner up Michael Schumacher in the last third of the season. Both drivers earned points finishes in almost all the remaining races (with the exception of Barrichello's 12th place finish in Japan), with the season ending high note with Button's 3rd place finish in the Brazil - less than a second behind 2nd place Fernando Alonso - after having to start from 14th on the grid.

On November 15, 2006, it was announced that long time BAR Honda and Honda test driver, Anthony Davidson would be heading to Super Aguri F1 to race alongside Takuma Sato. He was replaced by ex-Red Bull racer Christian Klien for the 2007 season.

With tobacco sponsorship in F1 in full decline, 2007 also saw the end of British American Tobacco's sponsorship of Honda, allowing the team to choose a livery that better suited their corporate image. Unveiled on 26 February 2007, the RA107 car featured the bare minimum of corporate advertising (advertising required by the FIA), instead focusing on Honda's environmental desires, with a livery depicting the planet Earth against the black background of space. On the rear wing was the web address of environmental awareness website myearthdream.com. This site was launched February 27, 2007, immediately after the official launch of the 2007 car. Reactions to the new Honda livery were mixed, with Greenpeace accusing the team of being hypocritical, given how polluting F1 is.[3]

The team's form in pre-season testing was patchy, and Jenson Button urged the squad to improve. The RA-107's sheer lack of pace was evident at the season-opening Australian Grand Prix in Melbourne on March 18th, with Button and Barrichello qualifying 14th and 17th respectively (well behind the 'satellite' Super Aguri team, whose car is effectively an update of last year's Honda, the RA-106). Barrichello finished the race in 11th place, with Button in 15th after receiving a drive-through penalty for speeding in the pit lane. The team also failed to score points in the four subsequent races, their best finish being 10th in Spain and Monaco, scored both times by Rubens Barrichello. Honda finally scored a point in the French Grand Prix, courtesy of Button's eighth place finish.

From July 2007, recognising the aerodynamic problems within the car, Honda began to recruit a new team from across the Formula 1 paddock. Chief aerodynamicist Loic Bigois and assistant Francois Martinet were signed from WilliamsF1; Jörg Zander and John Owen from BMW Sauber either later in 2007 or early in 2008.[4] 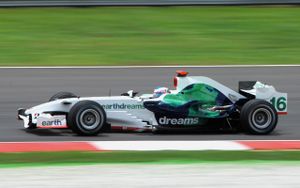 On July 19, 2007, it was announced that Barrichello and Button would continue the factory effort as teammates into 2008.[5] On November 12 2007, autosport.com confirmed that former Ferrari technical director Ross Brawn was to join Honda as team principal. Nick Fry remained with the team as Chief Executive. [6] On the 10th January 2008, it was announced that Alexander Wurz had signed as test driver for the 2008 Formula One Season.[7] On 29 January 2008, Honda launched their 2008 race car. The "Earth Car" had a slightly different livery from its 2007 counterpart, with only part of the car containing the earth picture, and the rest with Honda's classic white paint. Button, Barrichello and Wurz were present at the launch.

Honda had another disappointing year, and by mid-season they had switched development to the 2009 season, where new regulations come into play. Despite this, Barichello managed a podium in the wet British Grand Prix with an inspired choice to full wet weather tyres at the right moment.

The team continued until the end of the 2008 season, when Honda again exited the sport, unwilling to continue the Brackley-based team's $300 million budget and staff of 700 during an extended period of global economic crisis.[1] Nick Fry and other Honda F1 senior team management "intend to make every effort possible to secure the future of the team"; they have received assurances that "Honda will provide the necessary support to complete the Honda RA109, the team's 2009 F1 contender and believe they "can still have a very successful 2009 season if a new owner can be found."[8] Many possible new owners have been linked to the team, including Prodrive boss David Richards[9] and Mexican billionaire Carlos Slim [10]. It is also rumoured that the team will enter the 2009 season with backing from driver Bruno Senna's personal sponsors and Honda itself. Senna would be joined by Jenson Button and the team would use Mercedes-Benz engines. [11]

On the 18 February, it was confirmed that Virgin Group had made a bid to buy the team.[12]