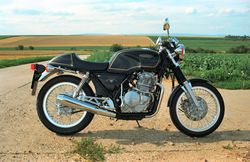 In the late '80's, Honda experimented with a number of very unusual motorcycles. The GB500 Tourist Trophy was one of them. Originally marketed in Japan as a 400, it was exported to the US, Europe and Australia as a 500. It was a moderate success in Japan, but in the US sales were hindered by the American love for large engines and dislike of the fairly high price tag.

The design used a 4 stroke dirt bike motor that was by that time already famous for its near unbreakability. That thoroughly modern, four valve hemi single was wrapped in a vintage look tube frame and wire wheels, with what some consider to be the world's most beautiful gas tank. The look is pure vintage while actually copying no particular vintage model.

The Tourist Trophy name comes from the most famous road race of mid-century motorcycling, the Isle of Man Tourist Trophy competition. This is a tight race on narrow twisty roads through the towns and villages of the Isle of Man (between England and Ireland) where quick steering and precise handling works much better than huge horsepower. It was dominated for many years by single cylinder 500cc racebikes with "the look" that the GB500 copied.

In the US, the GB was considered too small and too slow. Sales were slow too. GB's were only imported for two years, 1989 and 1990. By the time the new inventory was gone from the showrooms it had already become known as a cult bike. Today, a good GB sells for as much or more than it did new, in 1990.

Quite a number of both the 400cc and 500cc versions were imported into New Zealand, and many are still on the road now. A very popular option as the engines got on in age is a 600cc big bore kit. Many of these kits have been installed in the NZ versions.