The Honda Gold Wing motorcycle had its debut in 1975, and became one of the most popular motorcycles in history. Initially intended as a road bike, it started the new trend in "touring bikes". Gold Wing is the first motorcycle with the airbag system available.[1]

The first appearance of the Gold Wing was at the Cologne Motorcycle Show in October 1974. It was a flat-4 999 cc motorcycle. It got immediate attention because of some cutting edge technology for the time. This includes: 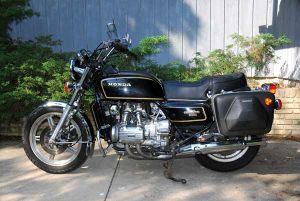 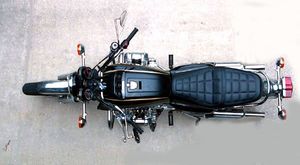 1978 GL1000 from above shows the opposed cylinders

The first production model GL1000 came out in 1975, and was in production until 1979. The bike was listed as a touring bike, but it came as a bare bike. A large market developed offering fairings and luggage, the most popular being the Windjammer series by Vetter. With only minor differences for different markets this bike remained virtually unchanged for 1975–1977 production run. In 1978 there were many changes made: faux tank shape, instruments on the top of the faux tank, seat, camshafts, carburetors, exhaust system, Comstar wheels, deletion of kickstart, etc.

During the final run of the GL1000 (1979), Honda finally released their own saddlebags and trunk (although they did not produce a fairing).

First released in 1979, the GL1100 was made until 1983. For the most part, this was the same bike as the GL1000, but with some improvements. The engine was the same, but it was bored to a larger 1085 cc cylinder, and electronic ignition replaced the older point system. The suspension was changed to an air adjustable system (a first for a production motorcycle). Many parts were interchangeable between the 1000 and 1100 models.

The base bike was now called the "GL1100 Standard." In 1980 Honda also introduced the "Interstate" version of the Goldwing. This was the second production bike (after the 1979 BMW R100RT) to come standard with touring accessories like a trunk, saddlebags, and a fairing.

In 1981, production of the Gold Wing was moved from Japan to Ohio, USA. This move brought manufacture of the motorcycle to its largest market and allowed Honda to market the machine as being made in America.

In 1982, the "Aspencade" was introduced. This was an Interstate model, with more options. AM/FM Radio and two-tone paint was standard on the Aspencade (these were options on the Interstate) while floorboards, chrome and CB Radio were options on both models.

In 1983, Honda made a few substantial changes for the final year of the GL1100. This includes an LCD dashboard, anti-dive forks and a change to the transmission to improve fuel economy. The size of the trunk was also increased, and the seat and footpegs for the passenger were moved to provide more comfort.

In 1984, the GL1200 was released, and was an immediate hit. This time the engine was totally new, and the size had grown to 1182 cc. The frame was larger, and stiffened for a smoother ride. In the Interstate and Aspencade models the fairing was integrated into the main body, eliminating the appearance that they were "added on". Now the Touring models truly appeared to have been created that way.

1984 however was the last year of the "Standard" model. Over the preceding years, sales of the Standard had declined in favor of the Interstate and Aspencade models. This also lead to the decline of after-market manufacturers like Vetter.

In 1985, the GL1200LTD was introduced. This was a limited model GL1200 Aspencade, with even more technology. Standard on the LTD was electronic fuel injection, auto leveling rear suspension, driver-passenger intercom system, cruise control, a Panasonic stereo with Dolby noise reduction, rear seat stereo speakers, an improved seat, a more elaborate paint scheme and an exclusive color (two tone gold), additional marker lights and cornering lights, a more sophisticated instrument panel, and a sophisticated trip computer. It also had an increased alternator capacity, allowing even more electronics to be added to the bike.

In 1986 the LTD was replaced with the SE-i. This model had an even larger 500 watt alternator, as well as all other LTD features, and was also available only in an exclusive color to the SE-i, a white and beige two tone.

In 1987 the SE-i was dropped, but some of the features were moved to the Aspencade model including the intercoms, cruise control, and the upgraded stereo. A simplified version of the trip computer was caried over as well. Fuel injection was not continued. 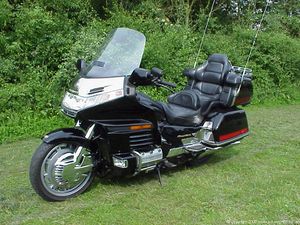 1988 brought the most changes ever to the Gold Wing. The GL1500 completely outclassed all competition to such a degree that Suzuki (Cavalcade), and Yamaha (Venture XII) abandoned the market segment. Kawasaki was the only competition that remained with the Voyager, until it too was discontinued in 2004. The biggest difference was that the flat-4 engine was replaced with a 1520 cc flat-6 engine, though it was still carbureted, Honda did introduce solid state digital ignition. This both increased power, and reduced noise. Honda also enclosed the entire motorcycle in plastic, giving it a seamless appearance.

One major innovation was the addition of a "reverse gear". Because of the size and weight, it was felt that some people would have problems backing it up.

Between 1988 and 1990, only one model was available. From 1990 Honda introduced the SE, which was essentially a cosmetic improvement including things like two-tone paint, a trunk spoiler and some others and most options where added to this model. In later years more features were added to the SE after criticism that the price premium brought little more than window dressing.

Other models included were the Interstate (1991–1996) this was a very basic version with no rear adjustable foot rests, a very basic radio, no intercom and other changes to make the bike a basic large bike. The Aspencade (1991–2000) which was essentially the same as the SE however it did not have the CB, the rear upper spoiler and no 2 tone paint work and other minor differences. Most of the lacking features of the Aspencade were able to be added by purchasing Honda after market parts (Hondaline). 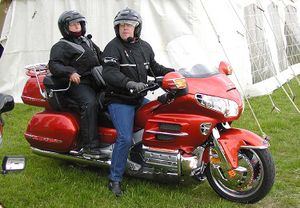 Gold Wing at a rally

In 2001, the first new model in 13 years was revealed. The security was so tight that nothing about it was known until it was first displayed to the public.

The new engine was increased to 1832 cc, and fuel injected. At the same time, the weight of the bike actually decreased from that of the GL1500. This was done by making the frame out of high strength aluminium. This was an extruded frame, and was composed of only 31 individual parts (almost half the number of the previous frame).

Another major improvement was an optional ABS braking system. This was a major advantage because of the increased power of the new engine.

In September 2005, Honda announced the world's first production motorcycle airbag system scheduled for availability in late spring of 2006 in the US.[1]

The 2006 model year introduced options for an in-dash GPS navigation display with audio information provided through the speakers and headset cables, and a rider comfort package including seat heaters controlled from the dash, heated handlebar grips, and engine-air vents (able to be opened and closed by a lever on the left side dash) located in front of the driver's foot pegs. A reduction in the frame weight was also accomplished beginning with the 2006 model year. 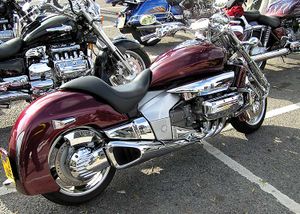 In 1997, Honda brought back an incarnation of the "Standard Gold Wing". Renamed the Honda Valkyrie in the US and F6C in the rest of the world, it featured a higher performance engine, based on the GL1500 in a cruiser style frame. A version with a windshield and saddlebags was also introduced as the Valkyrie Tourer. A much more touring oriented version was introduced in 1999 as the Valkyrie Interstate with a full fairing, saddlebags and trunk. These models were dropped due to slow sales, leaving the standard Valkyrie, which was discontinued after the 2003 model year.