The Honda Life is a kei car sedan produced by Honda. 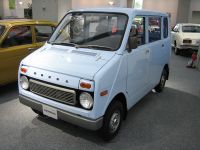 This van type variant uses a 360 cc, 2-cylinder water-cooled engine. The high back body increased its centre of gravity compared to the sedan version, making it easy to roll over under crosswind.

In 1997 the Life name was resurrected for a new line of small, front wheel drive 5-door MPV style cars for Honda, which required a redesign for 1998 because of new Japanese taxing regulations.[1]

In December 2000, a turbocharged variant named Honda Life Dunk was introduced as 2001 year model. Honda Life Dunk and Honda That's were listed by Forbes magazine as among the weirdest car names. [2]

In 2003 the model was updated, and now includes a 660 cc 3-cylinder engine, with an optional turbocharger, mated to a 4-speed automatic transmission and optional 4-wheel drive. The safety features were significantly improved and engine emissions were reduced.[3] A triangle window was placed at the mounting point of wing mirrors in 3rd generation vehicle.

In 2005, Honda introduced the DIVA model, which included aerodynamic styling and aluminium wheels.

2007 models started production on 2006-10-05. It marked the first use of Honda Smart Parking Assist System in a production Honda vehicle.