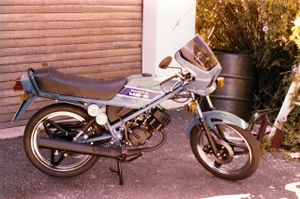 The Honda MB50 was produced in 1979 to the late 1980s (sales ended in 1981 in UK, but was sold in other European countires until 1988), and was a cross between a motorscooter and a sport bike. It was not intended to be a fast bike since it had only a 50 cc two-stroke single-cylinder engine; but it did have several features normally found on bigger bikes: a speedometer, a tachometer (with a redline of 10,500 rpm), front disc brake, and Honda's Comstar wheels. The MB was the road oriented version of the Honda MT50.

The saddle provided space for a passenger, but the bike would have difficulty carrying more than one rider.

The MB-5 was short-lived in the U.S., Honda only imported in 1982, it was more popular in Europe (see MB/T/X Series). A good USA site to visit is Honda MB5 Homepage