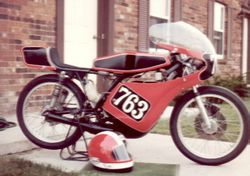 The Honda MT125R was produced for the U.S. market in the years 1977-1978. It was a production Grand Prix motorcycle racing roadracer designed for closed-course competition roadracing. The MT125R were produced by Honda Racing Service Center Honda Racing Corporation RSC and made available to the general public through the American Honda Motorcycle dealer network.

For many champion motorcycle roadracers, the road to the top started on a small engine capacity motorcycle. Top roadracers like Randy Mamola got their start on a 125cc GP racer. Others like Angel Neito spent their entire careers racing in the 50cc, 80cc and 125cc classes. 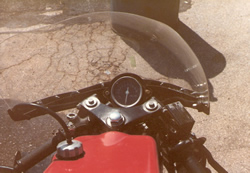 Good examples of this model will have the original "RSC" tachometer, factory prop stand which lifts at the footrests, owners/service manual.

The MT125R shares many parts with the CR125 engine. The CR versions were motocross bikes with similar specifications. One notable difference was the shift pattern on the transmission. Both had the standard 1 down 5 up pattern. On MT125R versions the shift lever was flipped over rearward to accommodate the rearset footpegs of the MT roadracer. To maintain the widely used 1 down 5 up pattern a different shift linkage was used behind the engine cover.

MT125Rs used a different cylinder than the CR versions when they were originally produced. At some point the part numbers were superseded by part numbers shared by both the MT125R and the CR125m Elsinore models.

Owners in search of parts after production stopped often substituted complete CR125M motors for their MT125R motors. The first clue is a reversed shift pattern from a stock MT125R (1 up 5 down)

Performance and riding the MT125R 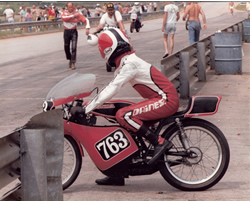 As with any 125cc roadracer, it was best suited for smaller riders. After bump starting the engine a good start required patience and finesse. To characterize the personality of the 125cc 2-stroke look at the RSC factory tachometer. It did not move or display engine rpm until 5,000 rpm and registered up to 14,000 rpm. With the tall gearing needed for top speed performance it would not pull its own weight until the tachometer was showing at least 9,000 rpm. The engine was in its peak powerband or, "on the pipe" from just below 10,000 rpm and went out of the powerband a little past 11,000 (depending on jetting and modifications).

To achieve a good start the rider needed to hold the throttle wide open and begin feathering the clutch as fast as possible while keeping the rpm between 10,000 and 11,000 rpm. If the tachometer dropped below 10,000 RPMs the rider needed to pull the clutch in, rev the motor and begin the process again. If the clutch was engaged too quickly the engine could "bog" or even stall while the rest of the starting field rode away. Even with the lightest of riders, the MT125R required slipping the clutch for 40 or more feet. The rewards for a successful launch were full throttle with quick shifts (approximately every 1,000 rpm) up through the 6 gears. At the end of sixth gear the hard working 123cc engine would be pulling along a straight stretch between 110 and 120 mph.