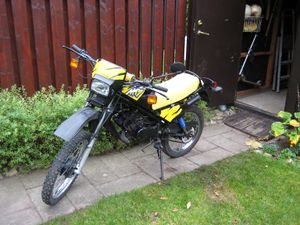 The Honda MT50 is an off road styled moped, common in Scandinavia and the Netherlands but also sold in other countries like UK and USA, that is more commonly known as the Honda MT5. Some countries had restricted verisons designed to be ridden by learners. It's leading competitor was the Yamaha DT50MX. Production started 1979 and ended 2000. Its sister was the MB50/MB5 which was the road styled version.