The first generation 1982 Honda V45 Magna was available in either Candy Maroon or Candy Imperial Blue.[1] The headlight and fenders are chrome. The front disc brakes have straight grooves, dual piston calipers, and TRAC anti-dive. The speedometer reads 80 mph. The redline is 10K rpm. The engine is a 748 cc DOHC 16-valve liquid-cooled 90 degree V-4 linked to a 6-speed transmission with a hydraulically actuated wet-plate clutch and shaft drive. Compression is high, and the stroke is short.

A milestone in the evolution of motorcycles, the V45's performance is comparable to that of Valkyries and Honda's 1800cc V-twin cruisers. However, its mix of performance, reliability, and refinement was overshadowed by the more powerful 1098cc "V65" Magna in 1983. Honda notoriously emphasized the speed of this bike. This era produced the very fast V-Max by Yamaha. Suzuki also joined in on the v-four cruiser trend with the Madura, mostly noted for having hydraulic valve lifters, as opposed to Honda's DOHC set-up, which was prone to premature wear of the cams.

The 1983 V45 Magna was available in one of two colors and the headlight, instruments, and fenders were chrome. The gas tank and side covers were the basic color (maroon or black). The front disc brake grooves were curved. The speedometer had a 150 mph (240 km/h) limit. The engine was a 748 cc DOHC 4-valve liquid-cooled V-4 linked to a 6-speed transmission and a shaft drive. (1983 starting SN JH2RC071*DM100011)

The US government imposed tariff rate hikes for foreign-built motorcycles in order to combat their rise in sales in North America, and to aid the domestic motorcycle manufacturers, namely Harley-Davidson. So for 1984 Honda responded by reducing the engine size for the 750s, and the Magna became the VF700C in the USA. Colours available for 1984 were either black or Candy Andromeda red. 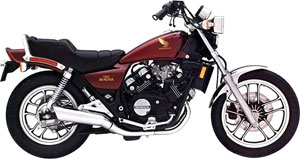 The Honda VF500 is one of Honda's second generation V4 motorcycle engines produced in a series of motorcycles designated with VF and VFR initials. For 1984-1986, Honda produced the 498 cm3, V4 DOHC VF500 for the VF500C Magna V30 and its sister bike, the VF500F. This engine is an evolution of Honda's original domestic market 400cc engine, originally deemed too small and underpowered for certain markets - notably the United States and Europe. Focusing on adding power and versatility to its motorcycle offerings, Honda bored the original 400cc motor and improved its power and performance. The engine is almost entirely identical to the version in the Interceptor VF500F sport bike, and while Honda sold the VF500C Magna in the United States, it advertised it as the "most powerful midsize custom in the world".[4]

This standard motorcycle was introduced as a balanced bike that was just as enjoyable yet easier to ride in town than its larger Magna siblings, with good power and a broad torque band. Thanks to its V4 design, power in the 500 engine is not peaky and ample torque can be found throughout the rev band, and the six speed transmission ratio was unique to this bike versus the ratio on the VF500F.[5] The engine produced between 64-68 horsepower, and combined with its low weight and low center of gravity, the bike was lauded by critics as an easy to ride and entertaining motorcycle.[5]

The Magna had no shaft drive like its larger siblings, but a traditional chain drive.[5] As well, unlike the larger displacement V-four motors, the VF500 did not suffer from the oil cooling issues of the larger V-four motors (the larger dispacement engines would not send sufficient oil to the cam lobes under 3,000 rpm, causing premature wear), yet the VF500 was still phased out as Honda reworked its technical designs for all its VF motors and cut down on its number of competing models in the market to keep from cannibalizing its sales. Today the bikes have a small but loyal following for their great handling and reliability. 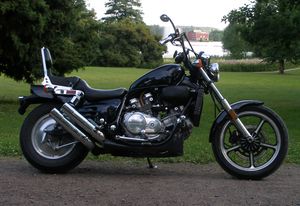 The 1987 V45 Magna was available in either Candy Wave Blue or Candy Bourgogne Red (1988 dropped Blue in favor of Black). For 1987, the fake airbox covers were wrinkle black with a "Magna" emblem. The fake airbox emblem changes to "V45" for the 1988 model.

The exhaust system was now an upswept 4-into-4 set of pipes, truly unique in the cruiser world. Although the exhaust pipes were a beautiful sight, they were not friendly to the use of saddlebags as they were too high. The rear wheel was a solid aluminum disc. The chin fairing was unfinished black plastic for the 87, and color-matched for the 88. The second generation was also the first to have the lower seat height of a mere 27.8 inches (706 mm), more than 4 inches (102 mm) lower than its predecessor. A total of 16,000 units were built for the 1987 model year, while only 3500 were built for 1988. (1987 starting SN JH2RC280*JA100001) 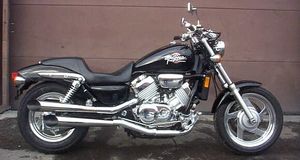 The 'Power Cruisers' category that had been occupied by the Kawasaki Eliminator and the Yamaha V-Max, (as well as the 1980s Magnas), was bolstered in 1993 with the Magna 750. As an early release 1994 model, Honda sought to capture the market for powerful cruisers by lifting the engine from the VFR750 and slotting it in a cruiser chassis. The engine itself was beautified by the addition of chrome and some extra fins, and by the chromed 4 into 4 exhaust. The seat was kept very low, at 28 inches, with the passenger seat being detachable. The all new frame was complemented by 41 mm forks, dual shocks, and a single disc on the front. A drum brake was used on the rear. A few internal changes were made to the VFR engine for use in the Magna, including a different crankshaft, a 5 speed transmission and chain driven cams. Smaller carbs were also utilized. The changes resulted in a stronger mid-range pull, and a very broad band of power.

The design of the 3rd generation Magna remained relatively unchanged over its lifetime. The tank decal was changed in 1995, and a miniature fairing was available on 1995 and 1996 Deluxe models. The only practical way to tell the year of a Magna from a distance is by its paint scheme, but even that is not a given since only a few colours were rotated through use. The most distinctive paint scheme was a "scalloped" design found on mid-late 1990s models.

2004 saw the demise of the Magna, along with other Honda stablemates such as the V-Twin Shadow ACE and Shadow Spirit, as well as the 6-cylinder Valkyrie. All these bikes have a strong following in their respective categories, and their current owners are saddened at the huge loss. However, just as the Magna was discontinued for a number of years between the 2nd and 3rd generations, it is rumored that there is a 4th generation Magna waiting in the wings that would satisfy enthusiasts' desires. One possible configuration includes dual-disc brakes up front, a single rear disc brake, extended range between refueling stops, a better stock seat, and updated styling. It has been suggested that the current iteration of the VFR800 with VTEC would make an ideal candidate, while other adherents would like to see the return of the V65 in Magna guise.