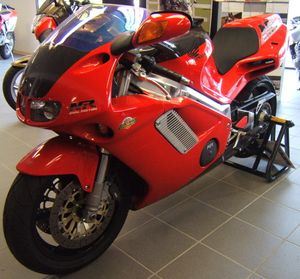 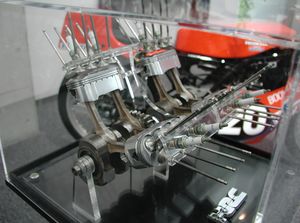 Honda's NR (New Racing) V-four motorcycle engine series started in 1979 with the 500cc NR500 Grand Prix racer that used oval pistons. This was followed during the 1980s by a 750cc endurance racer version known as the NR750. The oval piston concept allowed for eight valves per cylinder which generated more power due to the increased air/fuel mixture throughput and compression. In 1992 Honda produced around 300 street versions of a 750cc model, the NR (often mistakenly referred to as the NR750), with a 90-degree V angle. Whereas the NR500 had used an oval piston with straight sides, the road going NR750 used an elliptical piston with curved long sides. The bike became the most expensive production bike at the time when it was selling for $50,000 and with the rarity, they nowadays rarely change hands.

The origins of the 'NR' series of motorcycles lie in Honda's return to Grand Prix motorcycle racing in the late 1970s following an absence since their highly successful participation in the 1960s. During the absence of Honda, Grand Prix racing had come to be dominated by two-stroke machines that could easily attain a higher specific output than a four-stroke equivalent. Honda had long preferred to concentrate on four-stroke development and therefore decided to produce such a machine to challenge their Japanese rivals.

To achieve this aim Honda could have looked to follow their 1960's practice of increasing the number of cylinders to produce more power. However, Grand Prix rules at the time required a configuration with maximum of four combustion chambers. Honda engineers therefore came up with the highly innovative solution of constructing a 'V8' engine in the form of a four cylinder. This was achieved by designing an oval piston that allowed a total of 8 valves per cylinder, and connecting two con-rods to each piston. Such a configuration led to almost unprecedented complexity in terms of engine design, with 32 valves and eight con-rods incorporated into the dimensions of a regular four cylinder motorcycle engine.

Development and testing of the new engine proved fraught with difficulty (prompting some motorcycle journalists of the time to comment that NR meant "Never Ready") but Honda eventually succeeded in meeting the original performance criteria for the engine. The final 500cc race version was capable of developing approximately 130bhp at over 20,000rpm. However, this rarely translated into success on the track for the NR500, and Honda subsequently redirected its Grand Prix campaign in the form of the NS500 two-stroke machine.

In 1983/84, a 250cc V-twin using a supercharger and the 8-valve oval piston technology was developed but never seen in public.

The oval piston concept continued in the NR750 endurance bike, which made a brief appearance during the 1980s. Finally the technology was transferred to the road, at least on a limited basis, in the bike simply referred to as the 'NR'. One of the most expensive road motorcycles yet offered for sale, a limited number of the NR models was sold in the early 1990s with a 750cc version of the engine capable of developing approximately 125bhp at 14,000rpm in standard form. Although a heavy machine by modern standards, it incorporated a range of technologies and design features that have now appeared on more regular models.