Named after California's Pacific Coast Highway, the Honda PC800 Pacific Coast is a touring motorcycle manufactured in Japan by Honda between 1989 and 1998. Over 14,000 were sold [1] in North America, Europe and Japan, with a three-year hiatus between two production runs. The bike is noted for a single integrated trunk straddling the rear wheel, full bodywork, and distinctive two-tone paint.

Like the later Honda Goldwing [2] and Rune [3] , the Pacific Coast had been conceived and designed by Honda Research America specifically for the US market [4] [5]. Though the later Goldwing GL1800 incorporates integral trunks, other subsequent Honda touring and sport touring motorcycles — namely the Deauville, ST1100 and ST1300 — abandoned the wheel-straddling trunk concept.

According to one registry of PC800 owners [6] the motorcycles themselves are now — more than ten years after end of production — scattered worldwide. Internet discussion groups in the US, France, Germany, Italy, UK, Holland, Norway and Japan [7], continue to support the motorcycle, and PC800 owners from around the world continue to gather annually to ride the Pacific Coast Highway [8].

According to a 1998 Motorcycle.org article, "when the PC debuted, it was considered a radical bike." [9] The PC800 departed convention with its integral trunk, extensive bodywork and marketing aimed at the "white-collar professional" [10]:

Honda's marketing of the Pacific Coast took a cerebral approach:

In addition to naming the PC800 after an important American highway, Honda reinforced the association between the motorcycle and other notable highways of the world; advertising copy from the 1994 Pacific Coast brochure highlighted the famed Amalfi Drive and Blue Ridge Parkway, along with, of course, the Pacific Coast Highway [8].

Similarly, the name of the lower body color for 1996 model (see table below) made subtle reference to another notable motorcycling destination, the scenic Karakorum Highway, the highest international highway in the world.

In contrast to motorcycling advertising that emphasized rebellion or exaggerated masculinity, a 1989 30-second introductory television commercial for the PC800 depicted a couple awakening at a stylish waterfront home. She is seen running on the beach, he is seen showering, lifting his Rolex-like wrist watch from the bedside table, fixing coffee -- all with a Honda PC800 next to a grand piano in their elegant living room, the waves crashing visibly beyond. The commercial ended with a single shot of the motorcycle at a very calm (i.e., pacific) shoreline carrying the voiceover: "Introducing the Pacific Coast, from Honda. It is the beginning of a new day."

Unlike other motorcycles that offer detachable side or top cases for storage, the PC800 has an integral waterproof trunk under the pillion (passenger seat). The passenger seat is attached to a single trunk lid that hinges upward to reveal two storage areas that straddle the rear wheel — with sufficient capacity to carry "two full-face helmets and two medium-sized gym bags" [9] or "two grocery bags" [11] or "four plastic bags full of groceries, along with a small bag of dog food." [9] The trunk lid is held up by a hydraulic strut and is controlled by a release mechanism under the lockable fuel filler door.

Like other motorcycles with full bodywork such as the BMW K1200GT and Victory Vision, the PC800's plastic bodywork conceals almost the entirity of the motorcycle's mechanical underpinnings — in the manner of a scooter. While routine oil changes do not require panel removal [11] the PC800 owners manual calls for removal and replacement of four panels (two each side) for servicing the spark plugs and seven panels for servicing the battery.

The design of the bodywork includes three vents (visible in the photo above) on each side of the bike to cool the mechanicals: a pair of forward vents on the wheel cowling, a lower vent on each side for the transmission, and two larger vents to accommodate the engine's cooling system.

In contrast to other motorcycles with full bodywork, the PC800's trunk occupies the full unbroken width of the bike's tailend while the front wheel carries an unusual cowling — which reverted to a fender in 97-98 model years. For the entire production run, the visual bulk of the bodywork was mitigated by a lower-body accent color.

Honda outfitted the Pacific Coast as a "low-maintenance motorcycle for daily use" [10] aimed primarily toward first-time motorcycle owners. Riding position is standard or neutral, instrumentation is "automobile-like" [9], switches and controls are large and clearly marked, self-canceling turn signals were included (until MY1997) along with a seat height of 30.1" and an integrated fairing and windshield. 1989 and 1990 models offered an optional AM/FM radio. 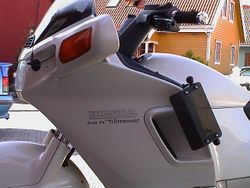 The following Hondaline accessories were offered for the PC800: