It was revealed to the public on January 25 2007 at the Circuit de Catalunya in Spain. The RA107 was launched with the interim winter testing livery before the final colours were unveiled on February 26.

The 'livery launch' for the RA107 took place at the Natural History Museum in London and showed a completely new take on the look of a Formula One car. Honda's 2007 paint scheme does not use sponsorship branding but instead is focused on Honda's environmental desires. The car has been dubbed by some (including Honda themselve and team CEO Nick Fry [1]) as 'The Honda Earth car' and the car's livery depicts the planet Earth against the black background of space, with the only logos on the car being the Type R Honda 'H', and the Bridgestone logo, all at the very front of the car. On the rear wing is the web address of environmental awareness website My Earth Dream, launching on February 27, 2007. This is the first time in 30 years that a Grand Prix car has gone to the grid without a sponsored permanent livery.

Along with the launch of the new theme, a number of new sponsors were named at the launch event. These included two large global brands, Universal Music and Gatorade, as well as a large number of other companies including Fila, IBM, Instron, Oliver Sweeney, Perkin Elmer, Showa Denko, TUV and GF Agie Charmilles. [1]

The team's form in pre-season testing was patchy, and Jenson Button urged the squad to improve. It seemed the car was unable to produce the sort of results the car's predecessor had done but nobody on the outside could have ever known how awful the situation actually was.

Rubens Barrichello driving the RA107 at the 2007 Malaysian Grand Prix, with its characteristic "Earth" livery.

The RA107's sheer lack of pace was evident at the season-opening Australian Grand Prix in Melbourne on March 18, with Button and Barrichello qualifying 14th and 17th respectively (well behind the 'customer' Super Aguri team, whose car, the Super Aguri SA07, is effectively an update of last year's Honda, the RA106). Barrichello finished the race in 11th place, with Button in 15th after receiving a drive-through penalty for speeding in the pit lane.

Things did not get better for either driver as the team did not score any points in Malaysia, Bahrain, Spain, Monaco, Canada or America either. The car's reliability was proving to be good but this only further exposed the lack of pace it had. Honda did have their chances to gain points, however, at Monaco, Canada and Europe. The former of those races was where Honda had their most competitive race up to that point but they were on the wrong strategy and required to pit an extra time, dooming them to another pointless race. The other two races, however, were ones of chaos and at Canada, Barrichello could have finished as high as third but was again on the wrong strategy which required him to pit an extra time dropping him to 12th. In Europe, Jenson Button had had a strong first lap before the rain arrived and was up to 4th place before he aquaplaned off the circuit at the end of the pit straight, as did five other drivers. 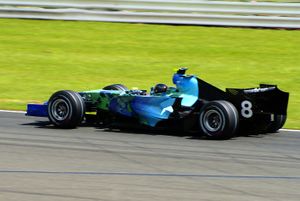 Barrichello driving the RA107 at the 2007 British Grand Prix.

At the French Grand Prix Button finished 8th, finally earning his and his team's first point of the season. This was a rare highlight as the car proved to be slow in subsequent races. The car put on its worst performance yet in Hungary where the RA107 proved to be the slowest car on the grid and Barrichello finished 18th and last. Honda debuted a front wing which looked very similar to the Spyker's wing. Button ran ahead of Adrian Sutil in his Spyker, but the Honda's engine failed before the Spyker could overtake during pitstops.

Jenson Button driving the RA107 at the 2007 British Grand Prix.

For Monza, Honda reverted to using the old front wing and it seemed to pay off. Button scored his and Honda's second point of the season. At this point, they were still embarrassingly behind Super Aguri in the points table. At the Belgian Grand Prix both drivers were running well out of the points before Button eventually retired with hydraulic issues. This was not before the Super Aguri of Takuma Sato managed to pass Button around the outside going into Les Combes as had happened before at the USGP where Davidson in the sister Super Aguri overtook Button's Honda.

Plans had been revealed by the Honda team that they would introduce a B-Spec chassis in the middle of the season. Sources stated that the new chassis would incorporate a longer wheel-base like the Ferrari F2007 and improved sidepods and air fluxation units. Sources said the team planned to replace the narrow front nose with a more efficient, wider nose and front wing. All of these sources were proved to be incorrect, however, and visible changes were limited to the front suspension along with a differently-shaped airbox. The car was introduced at the French GP and did not prove to be much of an improvement although it allowed Button to score his and Honda's first point.

The B-Spec Chassis was expected to form the basis of the 2008 car but were never released. They planned to make major changes with the new front wings, additional winglets on the sidepods to try and create more mechanical grip and aerodynamic force & forward & main rear bargeboards. However it turned out they did not bring any improvement to the car, and the team have decided against using them in 2008. [2]

During testing at Spain, test driver Christian Klien's RA107 was run with a set of large winglets towards the front of the car, arched at a high vertical angle and giving the appearance of elephant ears. The winglets were not used on the RA107 in races, although a modified version appeared on its successor, the RA108, at the Spanish Grand Prix.