The Honda RA300 was a Formula One racing car produced by Honda Racing, and introduced half way through the 1967 Formula One season. It retained the same V12 engine as the preceding RA273 car, but the chassis was designed by Lola's Eric Broadley and based on a previous Lola Indianapolis 500 car. This collaboration resulted in the machine being quickly dubbed the Hondola by the motorsports press. 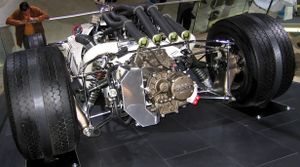 Broadley's chassis was much lighter and sweeter handling than the previous in-house design. The car initially performed impressively, winning in its first ever World Championship race at the 1967 Italian Grand Prix. Driver John Surtees took the lead from Jim Clark's Lotus and Jack Brabham's Brabham on the final lap, after Clark ran out of fuel and Brabham ran wide. However, the RA300 flattered to deceive, and this would turn out to be the only lap that an RA300 would lead, and it never again took a World Championship victory. It remains the only F1 car ever to take its single victory in its very first Grand Prix, and on the only lap it would ever lead.

The remainder of the 1967 season saw Surtees collect only three more points, with a fourth place at the 1967 Mexican Grand Prix. The car was superseded in the following season by the Honda RA301, a design closely based on the RA300. However, this did not improve Honda's results, Surtees only managing to finish four of the season's twelve events. 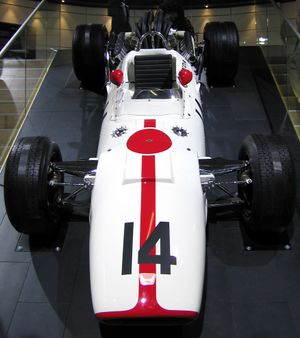 On display at the IAA exhibition in Frankfurt, 2007.

A detailed, driveable replica of the Honda RA300 appeared in 1998 as part of the F1 1967 lineup of cars in the Grand Prix Legends PC-based racing simulation. Although officially called the Murasama due to a licensing rights issue, it was soon referred to as the Honda (or 'White Whale') by users. Visually it was extensively upgraded by the GPLEA modding team after 1999 to resemble the real RA300 in detail.