The Honda RVF400R (NC35) is a motorcycle introduced by Honda Motor Company in 1994, powered by a V4 16 valve double overhead geardriven cam 400 cc engine and known for its supreme handling capabilities. There were two models, the R and the T, which were mainly identical apart from paint scheme. The RVF (as it was marketed by Honda in Japan) finished production in 1996, though unsold RVFs remained available to purchase from Japanese Honda dealers through 2001. The RVF400R is the smaller sibling of RVF750R (RC45), as the VFR400R (NC30) was to the VFR750R (RC30).

The Honda RVF400R was the successor to the Honda VFR400R NC30, which ceased production in 1992. While at first glance there appear to be mainly styling changes between the VFR400R and the RVF400R, the actual number of changes are vast as the entire bike was redesigned with numerous identical looking components being totally different.

The obvious differences between the VFR400R and the RVF400R are that the front forks are of the upside-down type and the rear wheel takes a 17" tyre (the Honda VFR400R took a 18"), there are two air tubes that feed fresh air to the area just in front of the air box (this is not a ram air system, the airbox is unpressurised) and the headlights have changed from twin round headlights to twin 'fox-eye' lights (this is one feature not mirrored from the RVF750R (RC45) as the RC45 features twin large round headlights).

Unlike the VFR400R the RVF400R was only officially sold new in Japan. The RVF400R outputs slightly less peak power than the VFR400R, but with a stronger midrange. There is a Haynes Manual for the RVF400R.

Like other Hondas with gear-driven camshafts, the RVF's engine makes a loud 'whine' sound when operating. The exhaust note of the V4 engine is also different from that of a more conventional inline four. The 400 cc VFR and RVF models share a unique exhaust note with their larger siblings -- the VFR750R RC30 and the RVF750R RC45 -- because of their 360-firing configuration. Most of the early V4s from Honda were 360-firing. Some examples include the VF500C/F, VF750/VF1100 C/S, VF750F/VF1000F. The VF1000R was Honda's first road-going 360-firing, gear-driven cam engine.

The RVF400R has a reputation for excellent reliability and good build quality, though not quite as high as its predecessor, the VFR400R. 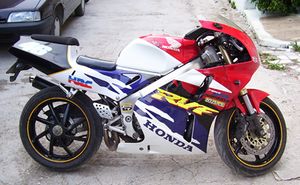 The carburettors were changed, the RVF's carbs featuring a flat slide and smaller diameter (30 mm against the NC30's 32 mm) but claimed to be better flow, the velocity stacks were also changed to allow a straighter flow.

The valve timing was changed with the exhaust valves opening earlier and closing later.

The engine position was changed with large cast sections of the frame now holding the engine lower down (these lower engine mounting points were unused on the VFR).

While the front cartridge forks were changed from RWU to USD forks, they remained the same diameter (41 mm) and make (Showa).

The frame was totally redesigned, with engine mounting and steering geometry changes.

The swingarm while looking identical at first glance is narrower (192 mm against 202 mm) and runs on a smaller diameter spindle (17 mm against 22 mm) with the rear hub and brake mounting points changed.

The front brakes remained as 4 opposed piston calipers but the trailing pistons were increased in diameter from 25.4 mm to 27 mm (the leading pistons remained at 30 mm).

It is possible on the VFR400 to change the rear brake disk without removing the rear hub, it is impossible to do this on the RVF400 as the mounting plate is larger and the entire hub requires removal.

The exhaust has a number of changes, the main change is that the silencer and collector are now separate and the silencer is held to the frame by one mounting point rather than two.

The silencer is now aluminium and held by 3 bolts to the collector.

The VFR400 is widely acknowledged to be a very good handling motorbike, the RVF400 is more of the same, the main difference being that while the VFR400 likes one line, on the RVF400 it is not a problem to change lines mid corner helped by the upside down forks

The RVF400 NC35 is still being raced in various classes including in the Manx Grand Prix on the IOM. The RVF has a hardcore following all over the club racing scene, having been a very competitive machine against the FZR400, GSX-R400, and comparable to the rest of the high performance inline 4 400s. This gem of the two wheeled variety is raced hard and fast amongst the last of its kind with AFM for the 2008 season.

There are a large number of aftermarket parts for the NC35. If an aftermarket full exhaust system is fitted, changing the oil filter may be problematic as some aftermarket downpipes are straight and do not have the bends in them to clear the filter.