The Honda S600 is an automobile manufactured by Honda. It was launched in March 1964. It was the first Honda car to be offered in two versions, as convertible, bearing strong resemblance to the Honda S500, and as a fastback coupe introduced in March 1965. During its production run up to 1966, the model styling would remain pretty much the same, with the most notable changes coming to the front grille, bumper, and headlights.

Powered by a DOHC, water-cooled, in-line 4 cylinder engine with four carburetors, the engine capacity was increased to 606 cc from the S500's 492 cc. The engine produced 57 hp (43 kW) at 8500 rpm and had a top speed of 90 mph (145 km/h). With the convertible weighing in at mere 1576 pounds, the extra sheet metal of the coupe only added 33 pounds to the overall weight. Suspension was independent with sealed roller chain drive to each rear wheel.

The S600 was the first "mass marketed" Honda car. First offered only with right-hand steering, it soon became available in left-hand steering so as to be appealing to the export market. (There were a few pre-production S500s manufactured with left hand steering, two or three even being shown in some early sales brochures, but all production S500s were right hand drive.)

Both the S600 roadster and coupe were available in standard trim and a special, upgraded package called the SM600 which included, among other items, special paint colors, exclusive badging, a standard radio and speaker, a special antenna in the passenger side sun visor, standard reversing lights, a standard cigarette lighter, a standard heater, better cushioned seats, and a detachable seat track for quick removal of the passenger seat. 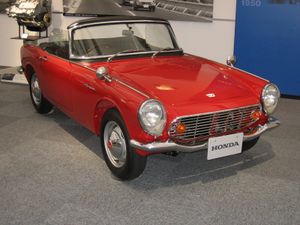 Production of the S600 was much greater than that of its predecessor, the S500. In fact, of the three production engine sizes for the sports cars, the S600 had the highest figures.