Honda Super Cub, (originally the Honda C100 or Honda 50) also known as the Honda Cub, is a 49 cc 4-stroke underbone motorbike first manufactured by the Honda Motor Co. Ltd. in 1958. With more than 60 million sold worldwide[1], it is the best selling powered vehicle of all time[2]. The Honda 50 is still produced today, 50 years after its inception. The variant Honda C90 with it's greater cubic capacity is also still produced. 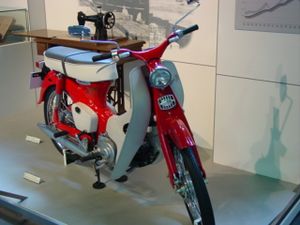 A version of the first Super Cub: Honda 50 CA100, a Honda Super Cub C100 based model for export to the USA

The Honda Super Cub debuted in 1958, 10 years after the establishment of Honda Motor Co. Ltd. (The original Honda Cub had been a clip-on bicycle engine). It was decided to keep the name but add the prefix 'Super' for the all-new lightweight machine.

Honda had discovered how to increase the power and efficiency of 4-stroke engines by increasing engine speed (RPM), and the company set about breaking into a market sector totally dominated by the 2-stroke models of other manufacturers. So successful were they that the Honda Cub became the most successful motorcycle model in history, and made huge contributions to Honda's sales and profit. Honda used the slogan You meet the nicest people on a Honda as they broke into the English speaking world, until then dominated by British motorcycles.

In 1964, two larger engined versions were offered, the CM90 (OHV 87cc) and C65 (OHC 63cc) with slight alterations to frame and styling. Around 1967, the whole motorcycle was uprated, the 50cc engine going from pushrod 4.5bhp to SOHC 4.9bhp (a bored-down C65 engine)called the C50, and similarly the 90cc was redesigned with an OHC engine called the C90. Though the basic design of Cub remained unchanged, slightly new styling features and improvements were integrated, most visible being the enclosed front forks. In the 1980s, Honda fitted a new capacitor discharge ignition system (CDI) to replace the earlier contact points ignition, thereby helping to meet increasingly strict emission standards in markets such as the US. However, many experts on the Cub testify to the fact that Honda used the CDI system for better reliability and fuel efficiency, with the emissions improvements being an appealing by-product of these goals.

In the 1980s, a larger 100 cc GN-5 engine model was introduced especially for Asian markets. The newer 100 cc model branched off from the Honda Cub model design, with new features such as a telescopic front suspension to replace the older leading link suspension, and a 4-speed transmission to replace the older 3-speed transmission used in Honda Cubs. These changes were not incorporated into the Honda Cub line-up, not interfering with the timeless and dependable design of the Cub, but rather, were integrated into new models such as Honda Dream in Thailand and Honda EX5 in Malaysia. These bikes were never intended to compete or replace the Cub in the very strong Japanese domestic market, but were more suited for the lucrative Asian export market.

In the late 1990s, Honda introduced their newer NF series motorcycles, known as Honda Wave series (Honda Innova in some markets) which use steel tube frames, front disc brake and plastic cover sets in various displacement options: 100 cc, 110 cc and 125 cc. Though not Cubs, these bikes sold consistently well particularly in European countries, where the production of Honda Cub models had been previously discontinued. However, the production of Honda Cubs in Asia, Africa and South America still continues today even though the newer Honda Wave Series and other designs have been introduced alongside the Cub.

In 2007, Honda began installing their PGM-FI fuel injection system for the Honda Cubs in the Japanese market for even cleaner emission and better fuel efficiency.[1]

Sales for Super Cubs have increased in Japan [1] with upgrades on the engine and the installation of fuel injection for JDM models starting from 2007, making it more powerful, more economical and cleaner. With respect to newer, plastic body underbone designs, such as Wave, the original Cub remains popular. The plastic-bodied Wave was not designed for delivery or utility, but rather for leisure. Hence the interest in exporting the bike, while keeping the Super Cub design popular in Japan. Yamaha has revamped their Mate series — heavily derived from the Honda Super Cub — except with a 2 cycle engine. Suzuki manufactures their own similar underbone motorbike, the Birdie.

Due to the popularity of the the Super Cub in Vietnam, the term "xe Honda" (meaning: Honda motorcycle) has become a Genericized trademark or Metonymy. In Malaysia, the word kapchai (a Chinese-Malaysian word from the Cantonese and Hokkien term "Cub仔", which means "little Cub", which in turn derives from an agglutination of the words "Honda Cub" and the Chinese "仔" [pinyin: zai]) is used to refer to all underbone motorcycles.

In 2006, in a show on the Discovery Channel, "The Greatest Ever", a fast-wheeling documentary on motorcycles, rating the best in a top-ten system, deemed the Honda Super Cub "Number One", declaring it "the greatest ever motorcycle".

Honda released a television commercial advertisement featuring the Andy Williams' recording "Impossible Dream". The ad cleverly displays Honda's milestone products in chronological order from the early Super Cub 50 all the way up to a stunning finale involving a hot air balloon and a waterfall.

The Discovery Channel ranked the Honda Super Cub as the Greatest Motorcycle of All Time[3]. The Super Cub was practically driven to destruction (use of used cooking oil and overloading), even dropped from a high place, but it still can be started.

See Video: The Greatest Motorbike of All Time