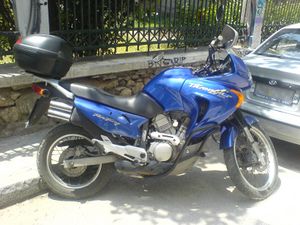 The Transalp is a dual-sport motorcycle by Honda. Different models have been in production from 1987 to present. It is a polyvalent motorbike, with capabilities for both long road trips and limited off-road. It features a liquid-cooled, six-valve, four-stroke 52 degrees V-twin engine, and is closely related to the Africa Twin and Honda Bros 400.

The first prototype was built in 1985, as an off-road motorbike with a 500 cm³ engine. Further development introduced an increase to 600 cm³ and more road-oriented features, notably an improved fairing.

The most usual models are

Other versions exist, such as the 400 cm³ version aimed at the Japanese market.

From 1991, the rear drum brake was replaced by a 240mm disc brake, with a single-piston brake caliper. The front brake was modified in 1997, introducing a second disc and reducing the diameter to 256mm.

The look was altered in 1994, replacing the original square lights, and introducing a new fairing.

In 1996, new 34 mm carburetors were introduced, and the ignition system was redesigned, replacing the electronic condensator model with a microprocessor-driven transistorised system.

The mass of the motorbike increased over time, from 175 kg for the first models to 196 kg for the latest version.

In 2000, the XL650V Transalp replaced the XL600V, introducing a the engine of the Honda Deauville and Honda Revere. The output increased to 55 hp at 7500 rpm, a torque increase to 5.7 mkg at 5500 RPM, and 4mm bore diameter increase allowing for a 64 cm³ displacement increase. The shock absorbers were redesigned for road use, the exhaust system was updated, the fuel capacity increased by one litre, the control panel was redesigned, and mass diminished by 4 kilogrammes.

In 2007, the XL700V Transalp was introduced, with a new 680 cm³ V52 engine taken from the Honda Deauville and compatible with Euro 3 emission standards. The front wheel diametre was reduced from 533mm to 483mm, the exhaust system was fitted with a cataliser, the lights were redesigned, and ABS was introduced.

The 2008 reinforces the road orientation of the Transalp, with larger tyres, lower saddle and more road-oriented shock absorbers.

Honda Transalp is popular especially in Europe and Japan. It has been used in several around the world adventures, such as The Tokyo to London Trip that was made from July to December 1994 by Australian bikers Walter Colebatch and James Mudie. 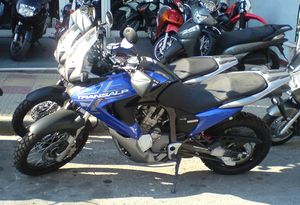 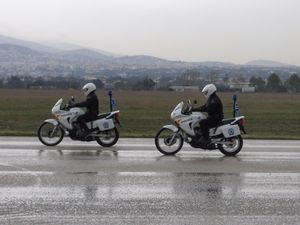 Transalp 650 is the motorcycle of Greek police 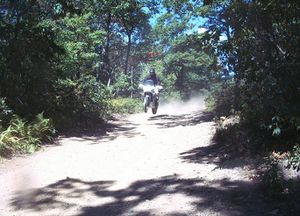 Transalp Being used off road