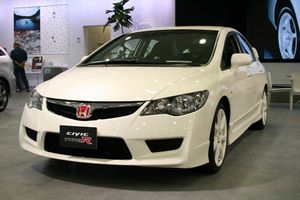 The design of Type R ("R" for "Racing") models was originally focused on race conditions, with an emphasis on minimizing weight, and maximizing performance potential (e.g. engine tuning, suspension set-up). Thus, Type R models were first conceived for racetracks. However, due to Honda's increased focus on their highly regarded VTEC engines. 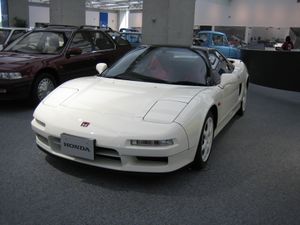 Honda produced a very limited number of NSX type R in 1992 for Japan. Major changes include a more aggressive suspension and an extensive weight reduction to 1230 kg from the normal NSX weight of 1350 kg. The NSX type R was very track oriented as it lacked sound deadening, audio, electric windows, and air conditioning in an effort to reduce weight. The NSX type R's role was replaced by the NSX type S Zero in 1995

A second iteration of the type-R dubbed NSX-R was released in 2005, again exclusively in Japan. The NSX-R has a more aggressive rear spoiler and hood vent, along with various refinements to reduce weight to 1270 kg. Under the body, panels and air fences in the front, along with a small rear diffuser serve to produce balanced downforce. The subtle changes along with its renowned handling have kept NSX-R in competition on the track even against considerably higher-powered cars, such as the Ferrari 360 Challenge Stradale, whose Nurburgring Nordschleife lap time it nearly tied. 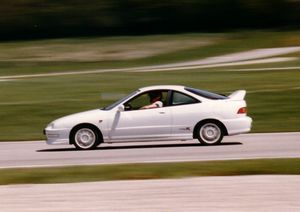 1998 Honda Integra for the European market

In 1995 Honda introduced their first Type R to the Japanese domestic market as a car that the common man could afford. The JDM Type R had the minor change long headlights that remained only for the JDM models while the world market version had the pre-facelift double round lights.

A regional variant is known in North America as the Acura Integra Type R (DC2). A Type-R variant of the North American RSX was not available. In the rest of the world the RSX (DC5) is still called Integra Type-R. (This applies to only certain production versions of the DC5, in as much as there are differences in the brakes, suspension, motors and other parts of the DC5 Type R versus the DC5 Type S.)

The DC2 Type R came standard with a 200 PS (figure may vary in different countries, 195 hp USDM) 1.8 L DOHC VTEC engine, known as the B18C5 (US) or B18C (Japan), and other versions depending on the country where it was sold. Equipped with a close ratio 5-speed manual transmission and a Helical LSD, the DC2 Integra Type R had significantly improved performance and handling relative to the base model GS-R or the SiR Integra.

These were the result of extensive changes, including a strengthened chassis with extra spot welds and thicker metal around the rear shock towers and lower subframe, weight reduction (reduced sound insulation, 10% thinner windscreen, lighter wheels), more power (due in part to an 8400 rpm redline hand built engine featuring hand-polished and ported intake ports, high compression pistons and revised intake), and suspension upgrades. The result was a capable sports coupe which was acclaimed by motoring journalists worldwide. Interestingly, there was little net weight difference between the Integra Type R and the Integra GS-R, because the extra metal and cross bracing in the Type R almost completely negated the weight reductions. Although the JDM version was significantly lighter than the base model SiR. The DC2 Type R was the only Type R ever sold in North America (With the Acura badge). For the European, Australian and New Zealand market the DC2 was sold as a Honda.

The JDM DC2 received significant upgrades in 1998 and is termed by Honda as the '98 Spec R. Some of the main changes were a redesigned rear bumper, 16 inch wheel with 215/45R16 tyres, 5-lug nut wheel hubs and bigger brakes from the 1997 EK9. Additional chassis reinforcement was done to bring the DC2 handling closer to its stiffer and newer chassis EK9 sister. Gear ratios for the final drive were higher making 1st to 3rd gears closer while 4th and 5th were longer to maintain the '96 Spec cruising comfort. The engine power remained the same but use of a new 4-1 exhaust manifold brought torque lower down to 6200rpm.

An interesting and little publicised fact about the 1996-2001 DC2 Type R is that Honda lost money on every single vehicle sold, even though extra dealer markups sometimes made for excessive dealer profit. Honda produced the DC2 Type R for homologation purposes to meet FIA certification of the motor and the chassis changes to make the car more competitive in N-series and World Cup racing. The details required, hand tooling in early versions and finishing the product through the use of various small fabrication shops in Japan made for increased costs in manufacture that could not be made up in the list price of the vehicles. Honda (and Acura in the US) deemed the car important for the marque's image and important for the racing programmes of the era, and the parent company therefore accepted a financial net loss on each vehicle sold.

The DC5 Type R (Japanese market only) comes standard with a K20A Template:Convert/hp 2.0 L DOHC i-VTEC 4 cylinder engine. The "i" in i-VTEC stands for intelligent VTEC, which employs VTC (Variable Timing Control) to advance or retard the timing up to 50 degrees. The Integra Type R comes equipped with Recaro seats, Brembo brakes, a close ratio 6-speed manual transmission, a limited-slip differential, and a stiffer suspension.

The Civic Type R models were preceded by the 1990-1991 EF8 CRX SiR and the 1992-1995 EG6 SiR-II. The 1990-1991 Civic CRX SiR was the first Civic ever to utilize the potent B16A engine and an optional LSD, and with a stripped out interior devoid of optional luxuries such as power windows, A/C and power steering, they proved to be quite a quick hatch. This inaugural top-of-the range Civic marked Honda's successes in Formula One, with multiple Constructor's Championships with the Marlboro McLaren team. The latter EG6 SiR-II used the same stripped out formula, with a Template:Convert/hp hike for the B16A engine and a marginally stiffer chassis, this time in a larger heavier body shell. The 1998 EK9 Civic was the first to be given the Type R badge. It featured a Type R prepared B16B engine producing 185hp, Helical LSD, stiffer chassis, upgraded sway bars and strut bars, Recaro alcantara seats, 15" alloy wheels and a large boot spoiler. Since then, most generations have offered a Type R variant. The Type R version of the Civic has never been sold in the U.S. 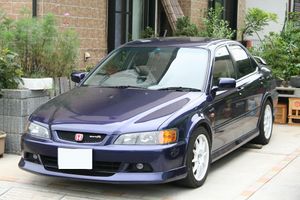