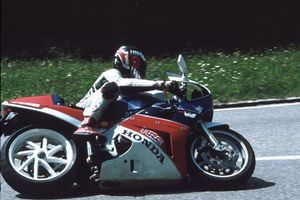 The Honda VFR750R, frame designation 'RC30', was a fully faired racing motorcycle created for homologation purposes for the World Superbike championship by Honda Racing Corporation (HRC). It was first released to the Japanese market in 1987. American enthusiasts had to wait until 1990 to get their hands on an RC30. The final one hundred RC30 machines were made for England in 1990. Even then, a lofty price approximately twice that of a production 750 of the time and limited availability made them a rare sight on public roads. The original intent of being a race bike didn't help the RC30 survival rate, where many were lost to the rigors of the gravel trap.

Though the 748cc 16-valve gear driven double overhead camshaft liquid-cooled RC24 derived 90° V4 produced just 86 horsepower (in its US release form, Most European bikes made 112 hp) — not a class-leading figure by 1990 standards — they contained race-inspired components. These included such items as titanium connecting rods that reduced reciprocating weight, gear driven camshafts and, had wheel and brake pads that had quick-release mountings. The engine firing configuration was very different from the road-going VFR750F from which it was derived with a 360 degree crank arrangement instead of 180 degree. This feature produced a very broad spread of power and, when coupled to the close ratio gearbox which had an extremely high first gear ratio (0 - 82mph), made the RC30 untouchable in terms of driveability when on the move. Slowing down was made easier with a slipper style clutch, and for the era, impressive braking capability.

The rear wheel carried a brake disc to the inside and a chain sprocket to the outside of a single-sided swingarm (developed in partnership with ELF), and attached with a single castellated nut and 'R' clip. It was also equipped with fully adjustable Showa suspension which, as it only had a single seat thus focusing suspension performance, gave superior ride and handling characteristics. The engine and low storage position of the fuel in the fuel tank combined to give a low centre of gravity which aided its handling prowess. Further statements of its hand-built quality were shown in a full stainless steel 4-2-1 exhaust system, alloy fuel tank and hand laid fibreglass bodywork.

The bike was fitted with an 'anti-squat' rear brake linkage that linked the rear caliper to the frame via a rose-jointed linkage through the swingarm (reducing rear wheel hop under braking).

While being inspired by the Honda RVF endurance racer (not to be confused with the RVF750 RC45) the VFR750R instead had its engine based on the 1986-7 VFR750F (RC24), the engines are almost identical externally, the only visible differences being in the cylinder heads and the engine side covers. Inside the engine no major parts were identical to the RC24. The clutch, gearbox, crankshaft, oil pump, connecting rods, water pump, pistons, starter clutch, and the entire valvetrain and cylinder heads are specific to the RC30.

It redlined at 12,500 rpm and weighed approximately 192 kg (420 pounds) ready to ride. Power outputs varied by country of sale with the most powerful advertised at 112 horsepower. Japanese domestic market, Australian, Swiss, and the US, specification machines were restricted in power output to varying degrees.

Some of the race kitted bikes featured the gear drive to the cams with two instead of three gears, this resulted in the cams running in the opposite direction.

The RC30 was superseded some 4 years after the last one was built by the RVF750 RC45 in 1994 but will always remain the predominantly collectable model as it gave the privateer a tool with which to race competitively, specifically in the Isle of Man TT races. Helmut Dähne in 1993 set the "eternal" record on the Nordschleife with a RC30.