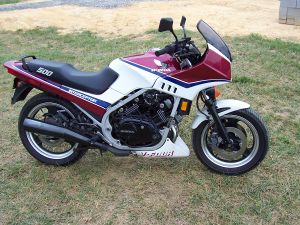 VF500F Interceptor, a.k.a. "Babyceptor" or "miniceptor," available as shown (red and white with blue stripes), or the reverse, (blue and white with red stripes).

The VF and VFR series (VF meaning Vee-Four, and VFR meaning Vee-Four Racing) motorcycle was a V-type four cylinder engine design from Honda resulting in a street bike. The bike was also first to utilize a Sprague (one way) clutch. 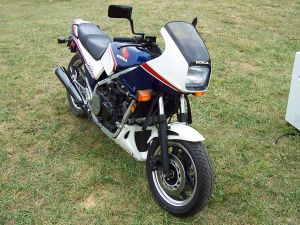 The V-Four engine was very prominent in Honda's early 1980s model line-up, with engine capacities ranging from 400cc to 1000cc. The V-Four design had only been used a few times in the history of motorcycles, most notably by Matchless. The concept probably[who?] came about as a loose derivation from the NR500 oval pistoned V-Four racer. The earliest VF series engine was designated the V45 for its size (45 in³ or 748 cc), was very narrow being only 16 inches (406 mm) wide, and had perfect primary balance making for a smooth, nearly vibration-free engine. A smaller V30 (500 cc) engine and a larger V65 (1100 cc) engine were also available, the latter becoming known as the fastest production bike in its time, and the original competition for the famous Yamaha VMax.

In 1982, first year of the VF models, reliability and quality control problems abounded due to new automated production equipment at Honda's plant in Hamamatsu, Japan.[1] Regardless, Honda sold out its first year inventory of Sabres, and the Magnas were not far behind. 1983 was a new year and a new start for the VF series of bikes, seeing the engine revised to correct the problems from the previous model year, and saw the introduction of the V65 and the Interceptor. 1984 was the year the infamous cam-wear problem surfaced in the larger displacement bikes, which, by the time it was corrected, led to eight factory cam revisions over the course of just one year.

The cam chain-driven valvetrain was later dropped from the VFR in favor of gear driven cams, to help distance the VFR from the reputation of earlier VF engines for faulty cam-chain tensioners that would allow for the tensioner to reach maximum travel, but the chain would still be within service limits. As the tensioner problem faded into Honda V4 history with recent redesigns, 2002 and later VFR engine designs have reverted to chain-driven cams. 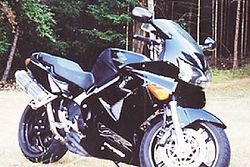 The RC30 was the racing version, replaced later by the RC45. In 1998 the 749cc VFR750 was replaced by the re-designed VFR800Fi, with a displacement of 781cc and fuel injection. This revision also gained Honda's DCBS linked brake system. In 2002 Honda released the VTEC version, which dropped the gear driven cams. The VTEC is different from the technology used in Honda cars, where the valve timing varies. On the 6th generation VFR, below 6,800 rpm, two valves per cylinder open and close, resulting in greater fuel economy and lower emissions. Critics, however, say this robs the engine of some of its power.[who?] Above the 6,800 rpm, the VTEC valves open and four valves per cylinder operate. Some critics say that the transition from one mode to another is not smooth, creating a jolt which can be unsettling if it happens mid-corner.[who?]