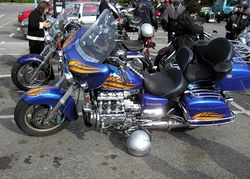 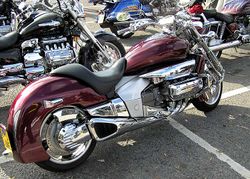 The Honda Valkyrie is a motorcycle that was manufactured by Honda, from model years 1997–2003. It was designated GL1500C in the US market and F6C in other markets.

The Valkyrie engine is a 1520 cc horizontally-opposed six cylinder liquid cooled boxer engine transplanted from Honda's Goldwing model. This was unusual since most "cruiser" style motorcycles were based on a V-twin engine design similar to the engine of a Harley-Davidson. In its transplant from the Goldwing, the most notable engine changes were the camshaft and the change to six individual 28 mm carburetors, one for each cylinder. These changes were made to increase power and torque. These changes also gave the engine a little more character by giving it a unique sound.

On introduction in 1997, a naked Standard and a Tourer model were offered. The Tourer included a windshield and lockable hard saddlebags.

In 1999, the Interstate model was added to the lineup, which included a fork-mounted fairing along with a trunk at the rear of the motorcycle.

Honda introduced a limited edition model in 2003 named the Valkyrie Rune with an 1800 cc engine. It was a major departure from the original Valkyrie in styling, purpose and price ($25K–$26K).

Honda presented the [EVO6 Concept Motorcycle][1] at the Tokyo Motor Show 2007. Based on the flat-6 1832cc engine from its Goldwing, the EVO6 is said to produce more power than its touring ancestor. The EVO6 features a transmission [HFT][2] that can be operated in a fully automatic mode or a six-speed manual mode.