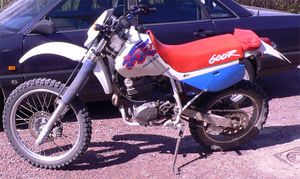 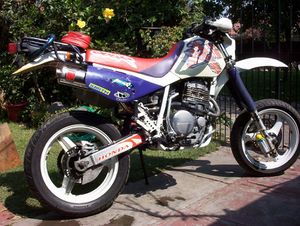 The Honda XR600R is a very popular offroad motorcycle with an air cooled single cylinder, four stroke engine. The bike was manufactured by Honda from 1985 to 2000, after which it was replaced by the liquid cooled XR650 model.

The engine displacement is 591 cc with four valves placed in a RFVC (Radial Four Valve Combustion) radial disposition with a single camshaft. It has a dry sump lubrication system. The engine has a compression of 9.0:1 with a bore/stroke of 97 × 80 mm. The engine is fed by a 39 mm piston-valve carburator. The front suspension is managed by two conventional cartridge valve 43 mm forks with compression and rebound adjustability, and in the rear is a Prolink single shock with preload, compression and rebound adjustability. The bike has a five speed transmission and a kickstarter.

General specifications for the Honda XR600R

These motorcycles are designed mainly for open and desert racing where speeds are over 50–60 mph (80–100 km/h). Nonetheless they were used in almost every off-road competition in the world, Enduro, hare scrambles, desert racing, rallies, and motocross (although it is a heavy bike for this discipline).

The bike was also favored by Sunday drivers, fun trips and legal on-road use where a little modification, mainly in the brakes and the wheels, allows for a great on-road machine. The Honda XR motorcycles are considered very reliable, low maintenance, rugged and dependable machines. The lack of a water cooling system allows for a hotter running engine but on the other hand make the bike is less prone to failure because it has fewer components that can be broken in a fall.

The feel from the engine is that of abundant yet controllable power; the torque starts at low engine speeds and is present in the entire rev range. The suspension is plush and comfortable—the drawback is that in tight circuit sections its size and weight makes it difficult to turn and maneuver against more modern machines. Its strength is in fast open sections, sand, hillclimb and rocks.

Although the bike is no longer in production, it has many die-hard fans around the world and is still present in many off-road events around the globe.