The TRX 450R is high performance All-terrain vehicle manufactured by Honda powersports. First introduced in late 2003 for the 2004 model year. Its only other competitor at the time of its introduction was the Yamaha YFZ450.

The Honda TRX250R, the predecessor to the TRX450R, was considered by many to be the best sport ATV on the market. Although Honda stopped producing the TRX250R in1989, it continued to see plenty of racing action. Towards the late ninety's and early 2000's, many racing sactioning bodies started to phase out two-strokes, eliminating the TRX250R from the racing scene. In 1999, Honda introduced the TRX400EX. This bike was considered to be the next great successor to the TRX250R. With a similar suspension setup to the TRX250R and a engine derived from the popular XR400 motorcycle, the TRX400EX became the new industry standard. Many racing sanctions had a displacement limit of 440 cubic centimeters, 400s were often bored and stroked to get their displacement closer to the 440 cc limit.

Since motocross racing sanctions were doing the same thing to phase out the two stroke racing bike. This left a large gap in the four-stroke market between the heavy, big-bore 650 cc bikes and the lighter, underpowered 250 and 400 cc bikes. Both Honda and Yamaha went to work on developing a high compression, racing four-stroke engine. In 2002, Honda released the CRF450R. Immediately after its release, rumors spread of CRF450R derived engine to be in an ATV, just as Honda had done earlier with putting an XR400 derived engine in the TRX400EX. Rumors also hinted of an all aluminum chassis and a wide number of transmissions.

On September 10th, 2004 in the Mandalay Bay Casino in Las Vegas, Nevada at the annual Dealer Meeting, Honda announced the introduction of the TRX 450R.

While both the CRF450R and the TRX450R both share the same displacement number, there are very few of the same components between the two engines. Initially, many people were disappointed because the first TRX450R was very weak compared to the CRF450R. Honda claims that it designed the TRX450R engine to produce more torque so that the engine was more suited for ATV purposes. In 2004 and 2005, the only interchangeable part between the ATV and motorcycle engines was the camshaft. In 2006, Honda overhauled the TRX450R engine to make it more similar to its motorcycle variant. This included a more aggressive cam profile, a larger bore with a shortened stroke, a new, short skirt piston and titanium rather than steel valves. In addition, Honda changed the carburetor from a 40 mm Keihin to a 42 mm Keihin . This increased the power from about Template:Convert/hp in the first generation to over Template:Convert/hp in the second. The first generation engine had a 10.5:1 compression ratio while the second generation had a 12:1 compression ratio.

Like the CRF450R, both ATV engine variants use a 5-speed transmission with a chain final drive. In addition, the both use a twin-sump oil system that separates the oil supply for the crankshaft, piston and valve train from the clutch and transmission. This allows a cool supply of oil to the clutch, eliminates clutch and transmission material contamination to the engine oil, and reduces the amount of circulating oil and the required size of the oil pump. The first generation engine had a oil cooler, but changes in the engine in 2006 allow the engine to run cooler, so the oil cooler was eliminated. A forward style kick-start lever is used to start the atv. Electric start versions would become available in 2006 and later years.

Because for many years the four-stroke class displacement limit was 440 cubic centimeters, many racing sanctions bumped this number up to allow the new 450 cc bikes and ATVs to compete.

Along with the introduction of the TRX 450R, Honda announced, after 17 years, it would once again support factory sponsored racing. The 450R would be the first factory sponsored bike out of any of the other atv manufacturers. Honda's first sponsored rider on the new 450r would be Tim Farr. The sponsored Honda team would compete in the ATVA MX and TT Nationals in the Pro-Production class. The 450r's first national race would be the 2003 Baja 1000.

The 450R was off to a good start even before it's public launch. The 450r was first across the line in the ATV class with a total time of 181 hours, 27 minutes, and 24 seconds. With an average speed of Template:Convert/mi/h. In the 2004 National MX races, the 450r would place 3rd overall.

Desert racing, and track racing would not be the only events the 450r would race in. The 450r would also compete in the Grand National Cross Country series although Honda would not sponsor any riders. 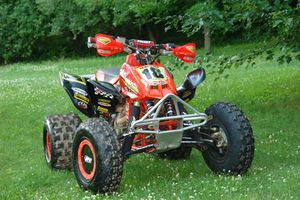 Following the first year of racing the 450R, riders knew what where the ATV would use improvement on the race level. Communicating their needs and wants to aftermarket manufactures. By the start of the 2005 racing season most 450Rs' that were being raced looked nothing like the ATV that was in Honda showrooms. Custom made suspension, different color plastic, exhaust systems, bumpers, skid plates, and even engine enhancements. With so many options available to owners and racers of the 450R, it became hard to find one that didn't have some sort of aftermarket accessory on it.

All specifications are manufacturer claimed.